The American Society of International Law (ASIL) has awarded UW-Madison Vilas Distinguished Achievement Professor of History Francine Hirsch the 2021 Certificate of Merit for a Preeminent Contribution to Creative Scholarship for her recently published book Soviet Judgment at Nuremberg: A New History of the International Military Tribunal after World War II (Oxford University Press, 2020).

The 2020–21 ASIL Honors Committee described Hirsch’s manuscript as beautifully written and rich in detail, recommending it as a must-read to historians and lawyers. It was one of more than 40 contenders reviewed and was unanimously recommended for one of this year’s four distinctions. The ASIL Executive Council approved the recommendations, and the honors will be presented at the 2021 Virtual Annual Meeting in March. 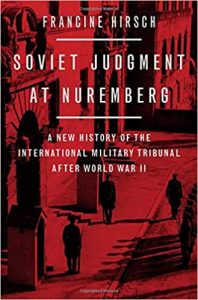 Fifteen years in the making, Hirsch’s book was “launched” at UW-Madison just ahead of the 75th anniversary of the Nuremberg Trials on October 12 at a virtual event sponsored by CREECA along with the Center for German and European Studies, A Room of One’s Own Bookstore, UW-Madison’s History Department, and the Mosse/Weinstein Center for Jewish Studies. That evening, Hirsch read select passages, shared insights into the research process, answered audience questions, and narrated the role of the Soviets during the trials.

“Popular narratives and films about the Nuremberg Trials tend to omit the Soviets or downplay their role. One goal of my book was to bring the Soviets more fully into the picture—to offer a fuller and more nuanced story of the Soviets’ role. Without the Soviets, Nuremberg may not have happened,” Hirsch said to the virtual audience of more than 70 attendees at the book launch.

“The Soviets were the first to call for a ‘special international tribunal’ in 1942 to try Hitler and other Nazi leaders. The Soviets also significantly shaped the trials through the powerful evidence they presented of the planned extermination of the Jews.”

The Honors Committee also commended the research process undertaken by Hirsch that included collecting hundreds of documents from Russian archives in 2005 and 2006 and comparing the Soviets’ accounts to those recorded by other Allied powers.

“I love working in archives and talking about them. I worked with five archives in Moscow that were critical for piecing together the Soviet side of the story, especially the Foreign Ministry archive,” said Hirsch during her October 12 talk.

“Because the Soviets were so dependent on direct instructions from Moscow, they were really writing to Moscow about every little thing. They were giving a play-by-play of what was happening in the courtroom and behind the scenes.”

One compelling storyline that emerged from Hirsch’s archival research was the role of the Soviet jurist Aron Trainin in shaping Nuremberg. The ASIL Honors Committee praised Hirsch’s book for highlighting this Soviet contribution. “Trainin first articulated the concept of a crime against peace, which ultimately served as the conceptual framework for the entire trial,” the Committee wrote. “Hirsch’s clear-sighted perspective illuminates two awkward truths – that illiberal authoritarian regimes may sometimes positively shape international law and that international justice is an inherently political process.”

Hirsch also presented on the book’s major arguments to a virtual audience of nearly 100 attendees at a CREECA lecture given as part of the Area Studies Showcase Lecture Series for Russia, Eastern Europe, and Central Asia—a collaborative effort of 11 U.S. Department of Education Title VI National Resource Center and Foreign Language and Area Studies grant recipients. At the November 19 lecture—on the eve of the 75th anniversary of the start of the trials—Hirsch underscored the significance of telling the whole Nuremberg story.

“Nuremberg involved endless negotiations and very difficult compromises among the four countries of the prosecution. And I actually think that this makes its achievements all the more heroic.”

The entire 2020-21 ASIL Book Awards report is available here, and the Area Studies Showcase lecture, “Soviet Judgment at Nuremberg: Revisiting the International Military Tribunal on its 75th Anniversary,” is available to stream here. Be sure to follow Professor Francine Hirsch on Twitter to be the first to know about her upcoming talks and the latest developments in her work.