In fall 2018, Kirill Ospovat joined the UW-Madison Department of German, Nordic, and Slavic as an assistant professor. CREECA sat down with Ospovat to discuss his current work and future projects. 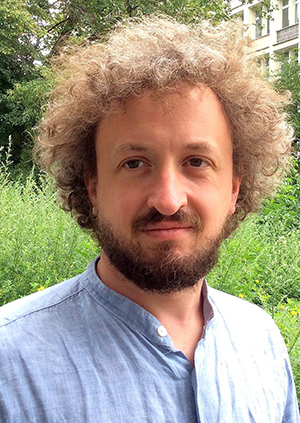 Where were you before coming to UW-Madison?

I was in Berlin, where I held several postdoctoral positions.

Well, yes, I would say I work in German literature along with Russian. The two absolutely do interact. In fact, if you look at how Russian literature evolved as an institution, it was constantly in dialogue with German literature—just as the Russian state was, in a way, in dialogue with German culture. Actually, when I was being considered for this position I spoke about Dostoevsky, but I also brought in some Marx. They were actually speaking and thinking about the same things simultaneously.

What are some of your recent and current projects?

Since my dissertation, I have worked mostly on 18th century Russian literature and its European context. My book Terror and Pity: Aleksandr Sumarokov and the Theater of Power in Elizabethan Russia is about the importation of tragedy as a form into Russia from France and Germany in the mid-18th century. Now, I’m moving on to different topics. For one, I am investigating the introduction of Western-type science to Russia under Peter the Great in the early eighteenth century. I am interested in the links between scientific knowledge and political and cultural thinking in Petrine Russia and its Western counterparts.

What classes are you teaching this academic year?

This semester I am teaching a course on contemporary Russia called The Evil Empire? Reading Putin’s Russia. We are discussing today’s news topics, among other things. The class is concerned with the state of Russian society and history since the collapse of the Soviet Union. We are reading some journalistic accounts and the news, as I said, but a large part of it also involves fiction, novels, and films, which give different perspectives on what is happening in that society today.

Are there any challenges to teaching that class?

Putin has been around for nearly twenty years, so there is plenty of material for discussion. The problem is, of course, that this is a class taught to undergraduates. So for the most part everything has to be in English. Films are easier, because they are subtitled more quickly. We are watching Zvyagintsev’s famous movie Leviathan, for example. With literature, on the other hand, you have to wait until the text is accepted by the U.S. market. This makes studying relatively recent works more difficult.

What do you hope your students get out of the class?

What we are doing is important in the sense that we discuss contemporary Russian politics, and this is a hot topic right now in the United States. We have actually had a class on the whole “collusion” story, and we have talked about election meddling. These things are not just Russia being “evil” as some say it always is; this is Russia playing a game that the U.S. and other countries played in Russia in the 1990s. Much of what we discuss in class I include because we need to explain the Russian background.

It is important to know what is going on in Russia in order to make a sane assessment of Russia’s role in contemporary politics. We live in a globalized world where it is necessary to understand the global processes common to Russia and the United States, and not just speak in terms of “us” versus “them.” It’s very interesting for someone like me who just came from abroad to teach and discuss this with American students.