Leading up to and amid Putin’s war on Ukraine, UW faculty members have been lending their expertise on Russia, Ukraine, and other post-Soviet states to various news outlets, including Paul Castañeda Dower (Agricultural and Applied Economics), Ted Gerber (Sociology), Yoshiko M. Herrera (Political Science), Francine Hirsch (History), Andrey Ivanov (History, UW-Platteville), and Andrew Kydd (Political Science). Hear them weigh in on the Russian invasion of Ukraine in more than 100 media interviews and authored pieces below.

“An Update on Ukraine” with Yoshiko Herrera, Andrew Kydd, and Mark Copelovitch for Wisconsin Alumni Association

“Putin’s Russia has crossed a threshold: It now looks like 1933 Germany: I don’t use ‘totalitarianism’ lightly. But that’s what we’re witnessing” by Francine Hirsch for the Boston Globe

“The Russian Invasion of Ukraine” podcast interview with Yoshiko Herrera

“Op-Ed: Lessons from the Soviets on how to hold Russia accountable for war crimes” by Francine Hirsch with UW alum Eugene Finkel for the Los Angeles Times

“‘Cancel culture’ targets Russian history amid war in Ukraine, but to what effect?” – USA Today (Gerber)

“No, Putin is not actually achieving his goals in Ukraine” – VOX (Herrera)

“The Week That Was: All of Lawfare in One Post” – Lawfare (Hirsch)

“Reading Russian Media Between the Lines: On Kommersant’s ‘Nuremberg’ Photo” – NYU Jordan Center for the Advanced Study of Russia (Hirsch)

“‘We could be looking at a phase in the war where a lot more people are being killed’: Ripon College webinars examine Ukraine conflict & its impact on commodity prices” – Commonwealth Ripon Press (Kydd)

“From Sturgeon Bay to sanctioned: The shipbuilding story of the ‘Lady M’ superyacht” – PBS Madison (Kydd)

“War in Ukraine: The human costs of power politics” – The Daily Cardinal (Herrera)

“UW experts weigh in on Ukraine situation, say US will not go to war” – The Badger Herald (Geber, Herrera)

“Ukraine and Russia: Fighting for the Border” – Exponent (Ivanov)

Why did Russia invade Ukraine? What is the historical relationship between the two countries? How are people reacting in Russia? What are the implications for the U.S., NATO, and international security? What will be the impact of sanctions imposed on Russia? On March 2, 2022, a panel of UW experts addressed these questions: Mark Copelovitch, Yoshiko Herrera, and Jessica Weeks (Political Science); Andrey Ivanov (History, UW-Platteville); Kirill Ospovat (GNS+). Stream the panel presentations below.

“In State of the Union, Biden will look to rally U.S., world against Russian invasion of Ukraine” – The Globe and Mail (Herrera)

“Sanctioning Putin over Ukraine crucial to protecting democracy worldwide, Biden says in State of the Union address” – The Globe and Mail (Herrera)

“WATCH: Breaking down the Russian invasion of Ukraine and what comes next” – News 3 Now / Channel 3000 (Herrera)

“New Updates from the Crisis in Russia and Ukraine” – Beeocracy! (Gerber)

“The Memo: Biden locks into battle with enigmatic Putin” – The Hill (Herrera)

“A new Cold War, or the start of World War III? How historians see the invasion of Ukraine”– USA Today (Herrera)

“‘The hope is finished’: life in the Ukrainian separatist regions of Donetsk and Luhansk” by Brienna Perelli Harris, Theodore Gerber, and Yuliya Hilevych for The Conversation

“Yoshiko Herrera on the Ukraine Conflict” – Live, Local, and Progressive on Chicago’s WCPT 820

“Vladimir Putin’s spokesman said, ‘Russia has never attacked anyone throughout its history.’ We say: ‘Pants on Fire. Take a tour with us through 450 years of world history.’” – Politifact (Herrera)

“What to know about the conflict between Russia and Ukraine” – WMTV 15 News – Madison, Wisconsin (Herrera) 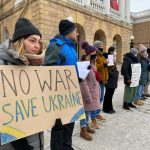