The world-renowned Russian folk music group Zolotoj Plyos is returning to Madison, WI for a performance at the Memorial Union Great Hall on Sunday, April 8 at 7:00 pm. The event is free and open to the general public. 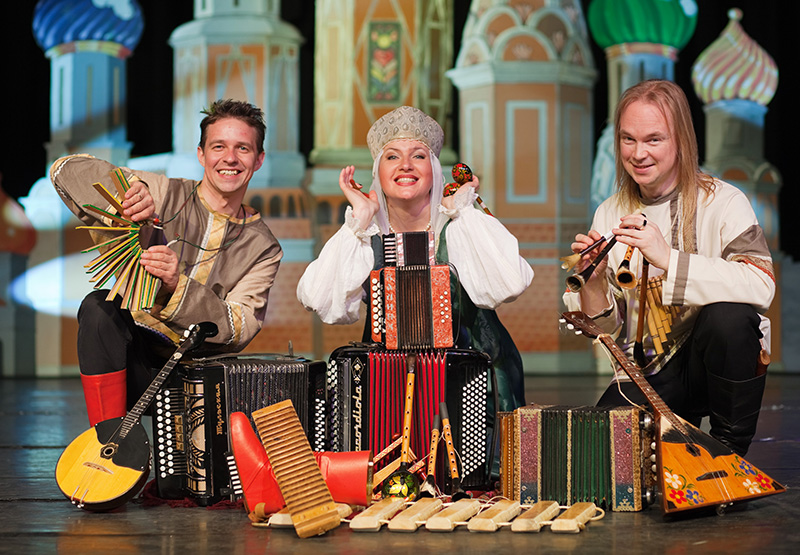 Zolotoj Plyos provides an energetic and interactive musical experience for listeners of all ages and linguistic backgrounds. Originally from the Saratov Conservatory, the group has traveled throughout Russia gathering and transcribing the native folk music traditions of many different communities. The musicians of Zolotoj Plyos—Alexander Solovov, Elena Sadina, and Sergei Gratchev—together play more than thirty Russian folk instruments, including the bayan, chromatic and diatonic accordions, the balalaika, domra, guitar, zhaleika, clarinet, saxophone, various percussion instruments, and Russian bells.

To complement their eclectic choice of instruments, Zolotoj Plyos is also known to play a diverse array of musical genres. The group regularly pulls from the Ukrainian, Belarusian, Moldovan, Georgian, Romani, and Jewish traditions to accompany their traditional Russian folk repertoire, occasionally adding even a touch of popular music.

Since 2000, the ensemble has made multiple tours of the United States. They have performed at Moscow State Tchaikovsky Conservatory, the main hall of the State Academic Choir in St. Petersburg, and the Kennedy Center for the Performing Arts. Zolotoj Plyos has also directed the Russian Choir of the Kathryn Wasserman Davis School of Russian at Middlebury College.

The April concert will mark the group’s fifth visit to UW-Madison, having previously visited in 2008, 2010, 2013, and 2016. The upcoming performance is possible due to the support of a number of organizations at UW-Madison, including: the Slavic Graduate Student Organization, the Center for Russia, East Europe, and Central Asia (CREECA), the Department of German, Nordic, and Slavic, the UW-Madison Russian Flagship Center, and the Alice D. Mortenson/Petrovich Distinguished Chair in Russian History.