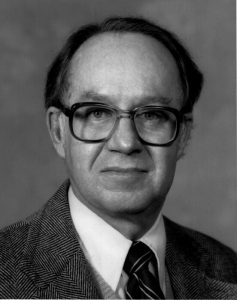 (Madison) James Orville Bailey, Jr. died at the age of 90 on July 20, 2020, in Madison, Wisconsin.  He was born on September 28, 1929, in La Junta, Colorado, but grew up in California where his parents moved when he was six months old.  After graduating from the University of Southern California he served three and a half years in the US Army, studying Russian one year at the Army Language School in Monterey, California.  During his service as a Russian translator, he met his future wife Hanna Ruth Potempa in Frankfurt, Germany, where they were married on November 8, 1956.  He received an MA Degree in Slavic Studies at Indiana University in 1958, spent the school year 1958-1959 as an exchange student at Moscow State University during the first year of the cultural exchange with the Soviet Union, and in 1965 he received his PhD degree in Slavic Languages and Literatures from Harvard University.  He taught in the Slavic Department at the University of Wisconsin-Madison from 1967 until his retirement in 1995, having served as Chair of the Slavic Department, Head of the Russian Area Studies Program, and Head of the Folklore Program which he helped found.  In recent decades he devoted most of his time to the study of Russian folklore, making trips to Russia to carry on research and to visit colleagues.  He published numerous articles and several books and collaborated on an anthology of translations of Russian epics.  He helped to organize and served as president of the Slavic and East European Folklore Association (SEEFA).

He is survived by his wife Hanna, by their sons Geoffrey Bailey and Michael Bailey, and by their grandchildren Ryan Bailey and Allison Bailey.  He was preceded in death by his parents James Orville Bailey Sr. and John Eva Bailey, and by his youngest son Gregory Bailey.

There will be a visitation held on Saturday, August 8 at CRESS FUNERAL HOME, 3610 Speedway Rd., Madison, from 10 am to 12 pm.  The Memorial Service will follow at 12 pm.  Interment of ashes will follow at Forest Hill Cemetery.  It is requested that in lieu of flowers donations be made to the National Alliance for the Mentally Ill of Dane County, Inc, 2059 Atwood Ave., Madison, WI 53704, https://www.namidanecounty.org