“Language ideologies and identities of multilingual youth in Kazakhstan and Uzbekistan” 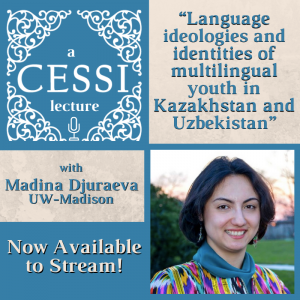 The July 2 CESSI lecture is now available to stream here.

Madina talks about her 8-year long research on multilingualism among Central Asian young adults. She shares her fieldwork experience in both Kazakhstan and Uzbekistan where she collected narrative data from over 60 student participants. Madina also shares a number of her key research findings around the themes of morality, belonging, and education.

Madina Djuraeva defended her Ph.D. in the department of Curriculum and Instruction at the University of Wisconsin-Madison. She is a Lecturer of Elementary Uzbek and she has previously taught both Tajik and Uzbek languages through CESSI. Originally from Bukhara, Uzbekistan, Madina grew up in a multilingual environment of the city, which eventually contributed to her choice of profession. Her doctoral research examines lived experiences of being and becoming multilingual at the nexus of language, education, policy, and identity in the contexts of post-Soviet Central Asia and transnational migration. She has published on the issues of (non)nativeness, language policy, and morality in multilingual Central Asian communities