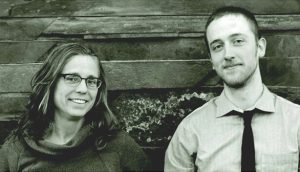 In November 2018, Angela Brintlinger and Thomas Feerick published Russian Cuisine in Exile, a collection of essays by Soviet émigrés Pyotr Vail and Alexander Genis. Professor Brintlinger received her PhD in Slavic Languages and Literature from the University of Wisconsin-Madison in 1994 and since then has written, edited and translated numerous books and articles about Russian literature. Angela has taught several generations of students at the Ohio State University, including co-translator Thomas Feerick, who is currently pursuing his PhD at Northwestern University.

Angela, the CREECA team congratulates you on publishing a tasty and witty translation of Russian Cuisine in Exile. The description says that this book is a must-read for scholars, students, and general readers interested in Russian studies. Would it be also a good read for someone who is not particularly keen on Russian cuisine?

Thank you for your kind words. I believe that a big slice of this book’s audience also consists of children, grandchildren, and friends of émigrés who do not read Russian and hence have not had access to these classic essays before.  I have been pleasantly surprised to see a lot of interest from Alexander Genis’s friends on social media who shared that they were buying the book for their English-speaking friends in Canada and the U.S. Now the dishes that émigrés have been preparing for those friends over the years will finally regain their cultural significance. This book is nostalgic for the Soviet Union and its food, but in a unique way. Vail and Genis had an allergy to the classic notion of nostalgia, which they said was just “one step away from propaganda.” To avoid it, they spiced up their experiences with that special brand of irony that was prevalent in émigré circles during the 1970s and 80s. Conveying this irony to the American reader was one of the hardest parts of translating these essays.

Indeed, in the foreword you use a quote from Sergei Dovlatov to assert that the book has been translated “not word for word, but smile for smile.” Can you think of any examples that illustrate this principle? 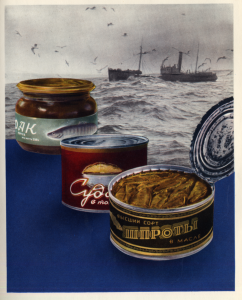 One that comes immediately to my mind is the wordplay in the title of Chapter 7. In Russian it reads as “Рыбий глас,” which literally means “fish voice,” but this phrase is also a homonym for a Russian phrase “fish eye.” We actually found the chapter titles to be the hardest part of our translation project. When Tom was translating this title, he wanted to play with the idea that this is the voice of the fish, while preserving this allusion to the fish staring back at the reader from a decorative platter. In our translation the title reads “Fish Tales,” which is about storytelling from the point of view of the fish in the same way as “fish voice” or “рыбий глас” was in the original. But the English word “tale” also evokes a tail, just as the Russian homonym “рыбий глаз” evokes an eye. At the same time, the phrase “fish tale” also suggests that there is something suspicious, fishy, about this title, and it that carries a little bit of humor with it. So while we inserted an allusion to a fish tail, which is absent in the original title, we tried to preserve the overall meaning of this wordplay for an English reader. When translating the witty irony of Vail and Genis, we decided that if we could not render something funny in one place, we had to find another opportunity in the text to make up for it, preserving this “smile for smile” balance.

This is such a wonderful example of preserving original meaning in a translation, but that’s not always possible to achieve. How else did you convey irony or allusions in this translation?

Throughout the book we used footnotes, but it was important to maintain a balance between explaining irony and being too wordy, between allowing readers to get lost in the text and providing them with additional needed information and context. We were able to keep the number of footnotes to about 200 and to place them on the page margins so as not to distract from the text itself. Alexander Genis, in an interview, which we include at the end of the book, said that at first he was horrified by the number of footnotes and jokingly compared the book to the classic Soviet book series Literary Monuments (литературные памятники), books which come with an elaborate scholarly apparatus of up to 1,000 footnotes. As translators, we wanted to give the English language audience enough information to help them recognize a joke or an important cultural allusion. This is tricky, though — no translator wants to use too many footnotes. But sometimes without them, important cultural contexts and deeper meaning are lost. For example, I was recently teaching a translated scholarly article by Russian food anthropologist Anna Kushkova. My students and I came across the description of this beloved celebratory Russian salad as being “our everything.” I can hear the original:  “Салат Оливье —наше всё,” which literally means “Salad Olivier is our everything.” But in this translation, the allusion is completely missing. Without an explanatory footnote, an English language reader would never hear the echo of the famous phrase “Pushkin is our everything” or realize that the cultural importance of the salad was being compared to that of the great Russian poet. Tom and I worked very hard on the footnotes: we did not want to distract a reader from the authors themselves, so we strove to provide just enough context to decipher culturally coded text without being too disruptive. The layout of the book also helped by incorporating these notes as a design element in a way that would not send the reader to the bottom of the page or to the end of the book, but would rather create an enjoyable and informative reading experience.

This translation project is also distinctive because you started it with one of your undergraduate students. Please tell us more about this co-authorship experience and your approach to student-teacher collaboration. 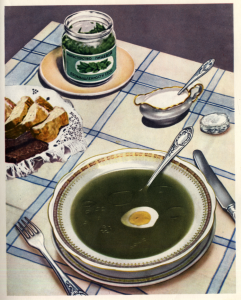 Several years ago, as I was teaching a capstone course for Russian majors on foodways, I realized that in addition to speaking skills my students also wanted to learn how to render Russian texts in English. So I gave each student one of Vail and Genis’s essays to translate. Tom was in that class, and his ability to translate irony, which is essential for Russian Cuisine in Exile, was remarkable. He brought a freshness to the project and a set of eyes that was more American than mine. I have been in the profession for 30 years now and tend to treat this text from the 1980s as my “home territory.” This was the period when I visited the Soviet Union and when I was in contact with the émigré community of that era; it’s a period I know very well. Tom, being a newer Russian learner, was always pulling me toward a more literal translation. He really wanted to be true to the text, whereas sometimes I wanted to move toward a more readable, fluid translation that mimicked Vail and Genis’s conversational style. It was really useful for us to act as foils for each other. Also Tom often noticed things that I would miss or came up with creative solutions, as in the example with the fish tale. I would not have been able to do the project without Tom, and I watched with pleasure as he honed his translation skills while we worked. This was a great model of collaboration and I hope to use it again. Working on a project with a faculty member gives students an opportunity to peek into the profession, understand translation work, and realize how much time and frankly cultural knowledge goes into the process, which can help to make future career choices. In Tom’s case this book project brought him to grad school at Northwestern University, where he continues working on translations.

Now that we have discussed the uniqueness of this translation project, what is, in your opinion, unique about Russian cuisine?

Well, it’s a scientific fact that Russians have a different palate. I always joke that the Russians, like the British, were desperately seeking good food and so continued to expand their empires. For instance, virtually all Russians love spicy, flavorful Georgian cuisine, while traditional Russian food, aside from horseradish and garlic, can be rather bland. In addition, Russians have a taste for something sour. They love soup and often put sour cream in it, which is not a common practice elsewhere. Overall, it’s been noted that northern nations like more sour or salty foods rather than sweet or spicy, and Russians are no exception.

Vail and Genis wrote this book not only about Russian, but also about Soviet cuisine, which resonates with émigrés from that entire region. What was so unique about that?

One thing that I try to teach about the Soviet Union is its fascinating cultivation of monolithic culture. Everyone was watching the same TV programs or movies, like Irony of Fate on New Year’s Eve, while eating that famous Olivier salad. These cultural elements resonate very well with people living in Riga, Moscow, Novosibirsk, or Vladivostok. Many food products that were popular at that time all over the Soviet Union also have special meaning these days because they bring back people’s memories of their childhood or youth. It is no accident that many post-Soviet companies nowadays remarket popular brands from that era such as mayonnaise provençale, thereby feeding this food nostalgia in the region and abroad. So, while it might be tempting to forget or even denigrate Soviet culture these days, I believe it’s very important to recognize its uniting value, its meaning for people who lived at that time. I try to do that in a collection of essays I co-edited, coming out in April, which is called Seasoned Socialism: Gender and Food in Late Soviet Everyday. 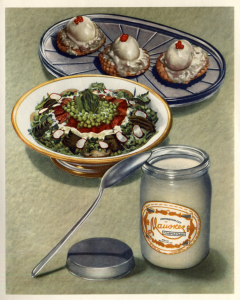 Lastly, what unique message can Vail and Genis’s book convey to a modern American?

When they arrived in the US, Vail and Genis were as horrified by the commercialization of American life as they had been by propaganda in Soviet culture. The American food industry existed for convenience and speed, with no emphasis on home cooking or family gatherings. Now, at least rhetorically, we see a push back toward more natural ingredients, fewer preservatives, homemade food, local produce, and overall more healthy food. But Vail and Genis had already noticed back in the 80s that “couples who dine together are the last to divorce, or so they say.” I hope this message of preparing and eating fresh and authentic food with your family will now resonate with American readers.