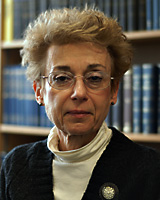 Rachel Feldhay Brenner, the Elaine Marks WARF Professor of Jewish Studies at the University of Wisconsin–Madison, died on Thursday, February 4 in Madison. She was 74.

Born in Zabrze, Poland, Brenner moved to Israel with her family in 1956. She studied at the Hebrew University, Tel Aviv University, and the University of York in Toronto before coming to Madison, where she joined the Department of Hebrew and Semitic Studies in 1992. In addition to chairing the department from 2004 to 2007, Brenner was an active member of the George L. Mosse/Laurence A. Weinstein Center for Jewish Studies, the Middle East Studies Program, and the Center for Russia, East Europe, and Central Asia. She was also a senior fellow at the Institute for Research in the Humanities.

An internationally recognized scholar of Hebrew, Polish, and Canadian literatures, Brenner published on a wide range of subjects, including the ethics of witnessing, the literature of the Holocaust, and relations between Israeli Arab and Jewish writers. She served as the president of the Association for Israel Studies from 2007-2009, was a fellow at the U.S. Holocaust Memorial Museum, and at the time of her passing was a board member of the Polish Institute of Arts and Sciences of America.

“In her research she always had a vision for new directions and a unique capacity to identify truth amidst conflicting testimonies,” recalls Lucyna Aleksandrowicz-Pędich, a professor at the University of Social Sciences and Humanities in Warsaw. Madeline G. Levine, a translator of Polish fiction and memoirs and professor emerita at the University of North Carolina at Chapel Hill, remembers Brenner as an incisive reader who “deployed the analytical skills of a superb literary critic” to probe crucial questions about the experience of witnessing atrocity.

Shoshana Ronen, the chair of the Hebrew Studies Department at the University of Warsaw, describes Brenner as “an interdisciplinary scholar par excellence,” whose writings deal with crucial questions about “the ethical and psychological outcomes of the Holocaust, resistance versus indifference in time of terror, the collapse of the ideas of the Enlightenment, ethics and politics, and whether the art of writing can be a spark in the process of tikkun olam (mending the world) after the shatter of the human world during the Holocaust.”

In the classroom, Brenner was known for her energy, enthusiasm, and intellectual rigor, and for the genuine interest she took in her students. “She loved to see students engage with one another,” remembers Hilary Miller (BA 2019), “to exchange ideas and offer insights. She wanted her students to honor their backgrounds and personal history while setting the expectation that, when entering her classroom, all preconceived notions could be challenged and subject to scrutiny.”

These memories are echoed by Shira Goldenholz (formerly Yuchtman, BA 1999). “I remember to this day the high standards she set for her students and her commitment to making sure each of us truly achieved our highest potential in her class. She expected a lot, but she gave no less.”

Tony Michels, Director of the Center for Jewish Studies, recalls Brenner as “a tireless scholar, fearless in confronting difficult questions. She seemed to gain momentum with each year.” Brenner also had many friends in the Department of German, Nordic, and Slavic, where her office was located. As GNS chair Thomas DuBois describes her, she was “a confiding, jovial, insightful colleague who always had a wry smile and a word or two about life on our campus, life in our country, or life in general.”

Brenner was the author of seven books and no less than eighty articles. Her 2019 book, Polish Literature and the Holocaust: Eyewitness Testimonies, 1942–1947, examines literary responses of Poles to the genocide of Jews during the Nazi occupation. Her book The Ethics of Witnessing: The Holocaust in Polish Writers’ Diaries from Warsaw, 1939-1945 received the University of Southern California Book Prize in Literary and Cultural Studies. Brenner’s other monographs include Inextricably Bonded—Israel Jewish and Arab Writers Re-Visioning Culture and Writing as Resistance: Four Women Confronting the Holocaust: Edith Stein, Simone Weil, Anne Frank, and Etty Hillesum. In recognition of her distinguished publishing record, she was awarded the Max and Frieda Weinstein-Bascom Professorship of Jewish Studies, which she held from 2009 to 2014. In 2020, she was selected to be the inaugural Harvey L. Temkin and Barbara Myers Temkin Professor in Hebrew Language and Literature.

A dedicated teacher and scholar, Brenner remained active until her final days. As recently as mid-December, she participated in a live-streamed panel on the uses and abuses of art in representations of the Holocaust at the meeting of the Association for Jewish Studies. Earlier in the year, at a conference in Paris, she presented a paper about her grandmother’s letters from the Warsaw Ghetto. And in 2019, she traveled to Israel, Poland, and throughout the U.S. to give conference papers and take part in roundtables.

Brenner is survived by her children Guy Brenner and Shelly Brenner, her brother Yoram Feldhay, and her four grandsons, Jacob Asoulin and Eli, Levi, and Ari Brenner.