Sandra Arfa, Director of the UW-Madison English as a Second Language program, died on May 5, 2022. Sandy was a core member of the UW-Madison Partnership with Nazarbayev University, lending her expertise to develop teacher training and English language programs for colleagues in Central Asia. You can read a remembrance from the English Department here.

Norma Berkowitz, Clinical Faculty Professor of Social Work and long-time CREECA associate, passed away on January 14, 2022. She founded the non-profit Friends of Chernobyl Centers, US (FOCCUS) and was dedicated to public health and social work in areas of Ukraine, Belarus, and Russia impacted by the 1986 nuclear disaster. She collaborated with CREECA faculty and staff to organize educator workshops in 1999 and 2006 on the legacy of the accident. Read about Professor Berkowitz’s life and legacy in this remembrance. 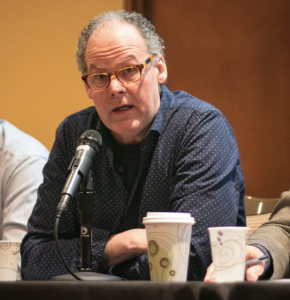 Bob Kaiser (Geography) retired from UW-Madison in spring 2022 after 26 years of service to the university. Professor Kaiser’s research has explored the intersection of cultural and political geographies, including nationalism, borderlands, and cyberwar. He regularly taught undergraduate and graduate courses in geopolitics and political geography of Russia, Eurasia, and beyond. Serving as faculty director of CREECA from 2001-2004, his wider teaching, research, and public service in the region benefitted innumerable CREECA students and faculty. Pictured here, Professor Kaiser gives remarks at the February 22, 2017 CREECA panel discussion, “Russia and the 2016 U.S. Election: Cyberwar and Prospects for Future Conflict.” 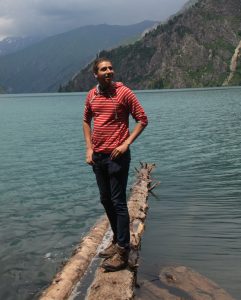 CREECA also congratulates former staffer Emily Gams on her Master’s in International Public Affairs and graduate certificate in REECAS, as well as the four undergraduates who earned a certificate in REECAS: Ryan Cody, Peter LaBelle, Garrett Prem, and Nicholas Quartaro!

Khasan Redjaboev (Political Science) has received several accolades to support his dissertation research on the political economy of development, transitions, and politics of post-communist Eurasia: the Bourse & Bazaar Foundation Visiting Fellowship, a two-year Mosse Graduate Fellowship in History, and the Harriman-Carnegie Russian Studies Grant. In addition, the Local Economic and Administrative Performance (LEAP) Research Team, which Redjaboev co-founded and coordinates, received an international seed grant of $25,000 from the Korea Development Institute. Learn more about Redjaboev’s work in this recent co-authored policy paper, “Russia’s economic crisis threatens Uzbekistan from within,” in East Asia Forum and in a recording of the webinar, “Central Asia’s Economic Dependence on Russia: The Role of Media Narratives,”  also featuring Anton Shirikov and Hannah Chapman (Political Science).

Angela Brintlinger (PhD in Slavic Languages and Literatures) has been appointed to a four-year term as Chair of the Department of Slavic and East European Languages and Cultures at Ohio State. She will continue in her role as Director for Slavic, East European and Eurasian Studies (CSEEES). 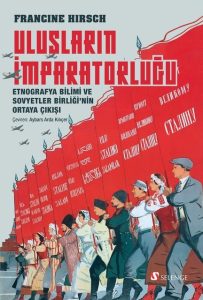 Francine Hirsch’s (History) 2005 Empire of Nations: Ethnographic Knowledge and the Making of the Soviet Union (Cornell University Press) is reaching new audiences around the globe. The award-winning book has been translated into Russian by Robert Ibatullin for Moscow: NLO (reviews are available here and here). A version translated into Turkish (pictured here) is also forthcoming, with a translation into Chinese expected later this year.

Liina-Ly Roos (GNS+) has published “It is so bad to be Estonian:’ parody music videos and remediated sites of national cultural memory on Estonian public broadcasting” in the Journal of Baltic Studies is now accessible online.

At a May 2 event commemorating the 231st anniversary of the 1791 ratification of Poland’s Constitution at the Polish Center of Wisconsin, Don Pienkos (Professor Emeritus of Political Science, UW-Milwaukee) gave remarks on the historical significance of Europe’s first modern constitution. Pienkos graciously shared his talk with CREECA in text form here.

CREECA’s Wisconsin Russia Project was well represented at the annual meeting of the Program on New Approaches to Research and Security in Eurasia (PONARS Eurasia) this March. In tune with the conference theme of “Domestic Politics in the Shadow of Russia’s Invasion of Ukraine,” Marat Iliyasov presented “War in Ukraine and Russia’s Memory Politics,” and Yulia Khalikova presented “Russia and International Law in the Aftermath of the 2020 Constitutional Amendments.”