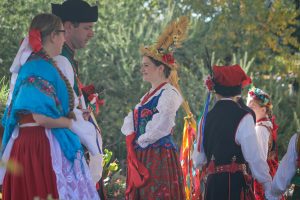 Specific attention was paid to the diversity of cultural traditions associated with harvest and its connections to the natural world. Performers represented West African, Ho-Chunk, Hmong, Polish, Norwegian, and Jewish traditions. 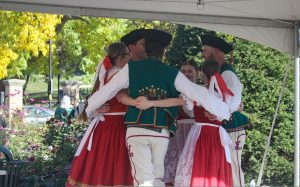 Red Thread and Syrena Polish Folk Dance Ensemble highlighted connections between harvest and culture. Syrena’s dances shared many dances common to the Dożynki harvest celebration. Dożynki is an important celebration of harvest typically associated with finishing the harvest of winter wheat. Many of Red Threads songs related to harvest and highlighted folk music from Central and Eastern Europe.

Overall, Allen Centennial Garden hosted nearly one thousand visitors, many of whom participated in other activities in the garden. The Harvest reflection activity, which took place on the terrace, encouraged visitors to draw pictures and share stories about what they traditionally make, do, and believe during fall. In the English Garden, a student fair showcased student research. In the afternoon, a May Pole was raised by the Norden House, with much excited participation. 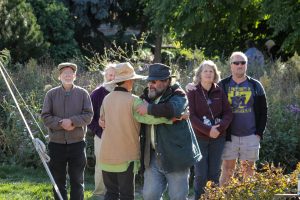 Allen Centennial Garden staff were excited by the event’s success and look forward to hosting an even bigger event next year.