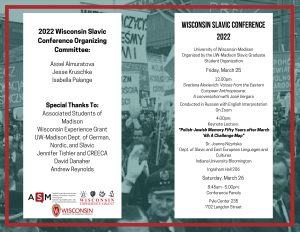 At the center of my attention, I place a series of events that I consider symptomatic of the shortcomings of the current discourse on Polish-Jewish memory, namely the 2018 commemorations of March 1968. Over half a century ago, the so-called March ’68 events led to the forced emigration of several thousand Polish Jews and their families. I argue that the cultural memory of the campaign in postcommunist Poland reveals Polish society’s unacknowledged anxieties—about Polish-Jewish relations and about the memory and legacy of the entire communist era—that haunt Poland today. I show how the commemorations triggered a conflation of anxieties about the Polish-Jewish relationship in 1968 with anxieties about the implication (à la Michael Rothberg) of ordinary citizens in the communist system (and its politics of memory) with anxieties regarding the Holocaust. I show how the positivistic hope that difficult pasts can be reasoned with by mere historical revisions to their (referential) history has often proved futile; I argue for a more nuanced set of analytical tools to help postcommunist societies orient themselves with respect to their multiple and unfinished pasts.