“When Nationalism Meets Soviet Modernization: The ‘Liquidation’ of the Nomads in the South Caucasus, 1921-1936” 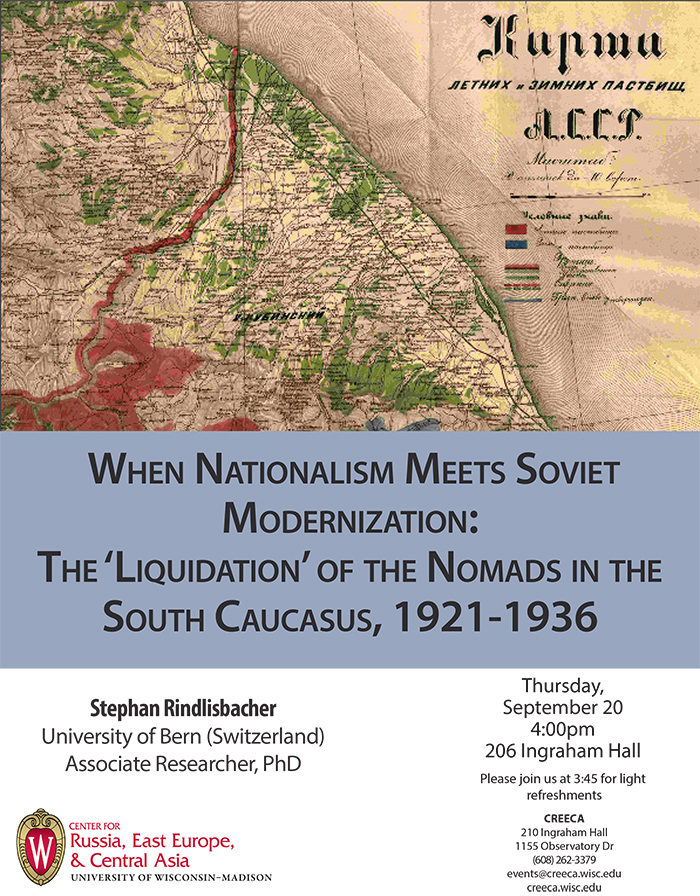 Ideal modern nation states have clearly defined borders and a sedentary population. People without a defined domicile who regularly cross national borders easily put such order into jeopardy. This presentation explores the problem of transhumance in the Soviet South Caucasus in the 1920s and the beginning of the 1930s. Relying on documents of the Transcaucasian state and party institutions, it provides insights into Soviet policies attempting to assert control over this “fluid” part of the population, placing it into the frame of the national state and on track towards a new, socialist economy.

Stephan Rindlisbacher acquired a mobility grant from the Swiss National Science Foundation for December 2016 to September 2019. The grant allows him to conduct research all around the post-Soviet world, including in the cities of Moscow, Kiev, Tbilisi, Yerevan, Bishkek, and Almaty. Currently, he is a guest scholar in the Department of History at the University of Wisconsin-Madison. In his current project, Rindlisbacher focuses on the question of how national territories in the Soviet state were established and regulated. Further, he is interested in the history of terrorism, transnational political networks, political commemoratory culture, and the history of Russian and Soviet paper money.