UW Law Lecture: The War Against Ukraine from the EU Perspective with Aistė Mickonytė 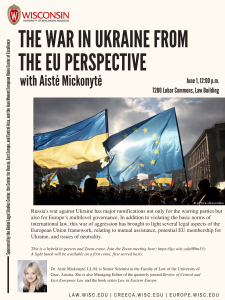 This is hybrid event taking place in Lubar Commons or via Zoom.

A light lunch will be available on a first come, first serve basis for those who attend in-person.

Russia’s war against Ukraine is proving to be a black swan event with major ramifications not only for the warring parties but also for Europe‘s multilevel governance. In addition to violating the basic norms of international law, this war of aggression has brought to light under-researched aspects of the European Union framework, such as the mutual assistance clause under Article 47(2) of the Treaty on European Union (TEU). Entailing an “obligation of aid and assistance by all the means in their power” if a Member State falls victim “of armed aggression on its territory,” this provision invites comparison with Article 5 of the NATO Treaty. Against this background, the speaker will reflect on the meaning and scope of the mutual assistance clause, its role in the common foreign and security policy of the EU, as well as its potential impact on the current and future EU-Ukraine relationship.

In addition, it will be argued that the war has resulted in a veritable overhaul of the EU approaches to foreign policy, as illustrated by the unprecedented arms supply and de facto economic war against Russia by the EU as an organization. The speaker will contend that despite overwhelming solidarity with Ukraine, numerous legal obstacles preclude fast-track membership requested by the country. Presenting the multi-faceted legal framework surrounding EU membership, Aistė Mickonytė will inquire into whether EU membership is compatible with the formal requirements under EU law as well as the turbulent political climate of the EU in recent years, which has been shaped by the rule-of-law dispute with Poland and Hungary, as well as the migration and asylum crisis.

Finally, the present context will be examined from a comparative perspective, by inquiring into the differentiated attitudes towards the EU-Ukraine relationship, as well as EU-Russia relationship. In this regard, the different responses to the threats emanating from the USSR – and Russia as its continuator State – ranging from neutrality in Austria or Finland to NATO-oriented approaches in the Baltic States will be considered. The speaker will maintain that in light of this diversity in approaches, agreeing on a mid- to long-term vision for Ukraine in Europe will present a challenge both for the European actors as well as for Ukraine itself.

About the speaker: Dr. Aistė Mickonytė, LL.M. is Senior Scientist at the Centre for East European Law and Eurasian Studies as well as at the Institute of the Foundations of Law, Department of Global Governance, both of which are based at the Faculty of Law of the University of Graz, Austria. She is also Managing Editor of the quarterly journal Review of Central and East European Law and the book series Law in Eastern Europe. In 2018, she was awarded an Austrian Marshall Plan Foundation Fellowship in Central European Studies at Johns Hopkins University/SAIS in Washington, DC. She has studied law at Mykolas Romeris University in Vilnius, Lithuania and in 2012, she acquired an LL.M. in European Business Law at Lund University in Sweden. Her doctoral thesis has been published in the book series Nijhoff Studies in European Union Law, under the title “Presumption of Innocence in EU Anti-Cartel Enforcement” (2019). Her fields of research encompass European constitutional law with a focus on fundamental rights and the rule of law. She has also participated in numerous projects and other academic endeavors dedicated to European integration and the Eastern Partnership, including teaching engagements at Ukrainian, Georgian and Armenian universities.

This event is sponsored by CREECA, the Global Legal Studies Center,  and the Jean Monnet European Union Center of Excellence.