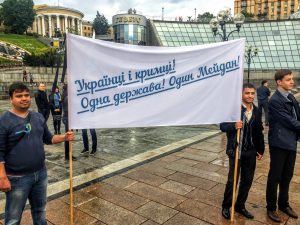 In this lecture, Dr. Austin Charron discusses findings from his PhD dissertation concerning socio-spatial identities among residents of Crimea who were internally displaced to mainland Ukraine following Russia’s annexation of the peninsula in 2014. Building on previous research into Crimean identities from before the annexation, Dr. Charron’s work examines evolving discourses of regional and national belonging among Crimea’s ethnic Crimean Tatars, Ukrainians, and Russians now living in the Ukrainian cities of Kyiv and Lviv, and considers the question of whether these groups may constitute a diaspora.

Austin Charron is a postdoctoral fellow with the Wisconsin Russia Project at CREECA. He holds a PhD in geography from the University of Kansas. Charron is a cultural and political geographer specializing broadly in Eurasia and the former Soviet Union, with a focus on Ukraine and Crimea. His research interests relate primarily to the roles of territory, ethnicity, and institutions in the construction of socio-spatial identities.