The Writing of Wisdom: Divine Sophia in Russia 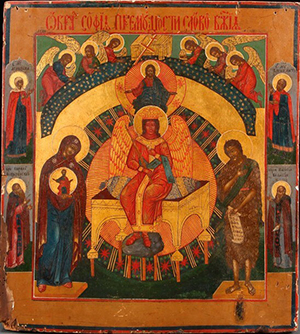 This presentation will analyze ancient icons of Divine Wisdom along with many other influences on the pivotal religious philosopher and poet Vladimir Solovyov and, through him, on his heirs in Russian religious thought in the 20th century. Solovyov wrote repeatedly of what he called Divine Sophia (or whom he sometimes referred to as Sophie, when the figure appeared to him or talked with him through his own pen). He experimented in multiple artistic genres and philosophical discourses, through which he attempted to articulate the “bogochelovecheskii” (divine-human) activity in which it/he/she engages. Fathers Pavel Florensky and Sergii Bulgakov embraced Solovyov’s concept in their own “Sophiology,” worked out both in Russia and in emigration after the Russian Revolution. The talk will end with speculation on if and where Sophia might be found today.

Judith Deutsch Kornblatt retired from a long career in the Department of Slavic Languages and Literature (now German, Nordic, and Slavic Studies), as well as the Center for Russia, East Europe, and Central Asia, the Center for Jewish Studies, and the Religious Studies at the University of Wisconsin-Madison and currently teaches part-time at the University of Tel Aviv. She has published extensively on subjects as diverse as the Cossack in Russian literature and Soviet Jewish baptism in the Russian Orthodox Church, as well as on Russian religious thought. She is the author of Divine Sophia: The Wisdom Writings of Vladimir Solovyov (Cornell University Press, 2009).