Book Launch of Maria Stepanova’s The Voice Over: Poems and Essays – A Reading and Conversation

The Center for Russia, East Europe, and Central Asia at the University of Wisconsin-Madison
in partnership with A Room of One’s Own Bookstore

The Voice Over: Poems and Essays – A Reading and Conversation

Moderated by Kevin M. F. Platt, Professor of Russian and East European Studies at the University of Pennsylvania and founder of Your Language My Ear translation symposium.

This event will be hosted on Zoom: REGISTER HERE.

To access the Russian-language text of Maria Stepanova’s poems, which will be read in translation at the book launch,
CLICK HERE. 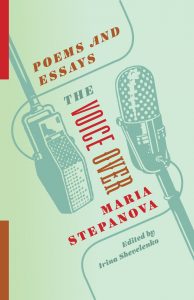 Maria Stepanova (b. 1972) is one of the most powerful and distinctive voices on the literary scene in Russia today. She is the author of over ten poetry collections as well as three books of essays and the documentary novel In Memory of Memory, just published in English translation and shortlisted for the 2021 International Booker Prize. An award-winning poet and prose writer, Stepanova is also a founder and editor-in-chief of a major platform for independent journalism, Colta.ru. Her verse blends formal mastery with a keen ear for the evolution of spoken language. As Russia’s political climate has turned increasingly repressive, Stepanova has responded with engaged writing that grapples with the persistence of violence in her country’s past and present. Some of her most remarkable recent work as a poet and essayist considers the conflict in Ukraine and the debasement of language that has always accompanied war.

The Voice Over brings together two decades of Stepanova’s work (1996-2016), showcasing her range, virtuosity, and creative evolution. Stepanova’s poetic voice constantly sets out in search of new bodies to inhabit, taking established forms and styles and rendering them into something unexpected and strange. Recognizable patterns of ballads, elegies, and war songs are transposed into a new key, infused with foreign strains, and juxtaposed with unlikely neighbors. As an essayist, Stepanova engages deeply with writers who bore witness to devastation and dramatic social change, as seen in searching pieces on W. G. Sebald, Marina Tsvetaeva, and Susan Sontag. Including contributions from ten translators, The Voice Over shows English-speaking readers why Stepanova is one of Russia’s most acclaimed contemporary writers.

Our partner in this book launch is A Room of One’s Own Bookstore, an independent, feminist bookstore that has been a fixture in downtown Madison, Wisconsin since 1975. Preorder Maria Stepanova’s The Voice Over as well as her two other recent books, In Memory of Memory and War of the Beast and the Animals, from A Room of One’s Own!