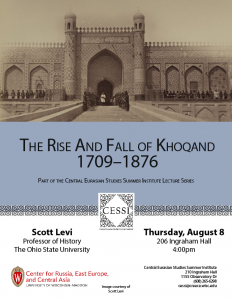 This talk will introduce key themes from Scott Levi’s recent book on the Khanate of Khoqand, a surprisingly dynamic state that emerged over the course of the eighteenth century in eastern Uzbekistan’s Ferghana Valley. The talk will address the ways that political, economic, technological and environmental developments influenced life in Central Asia and contributed to the rise, and fall, of Khoqand. It will also identify a number of ways that Central Asians influenced the policies of their much larger imperial neighbors on the Eurasian periphery – especially Tsarist Russia and Qing China.

Scott Levi earned his Ph.D. in History from the University of Wisconsin-Madison in 2000. He is currently Professor of Central Asian History at the Ohio State University. His research focuses mainly on the social and economic history of early modern Central Asia. He has published a number of books, the most recent of which is The Rise and Fall of Khoqand, 1709–1876: Central Asia in the Global Age (Pittsburgh, 2017). He has recently finished another book project, Early Modern Connections: Global Integration and the 18th-Century Bukharan Crisis, (Pittsburgh, forthcoming) and he also serves as the editor-in-chief for the Oxford Research Encyclopedia for Asian Commercial History.