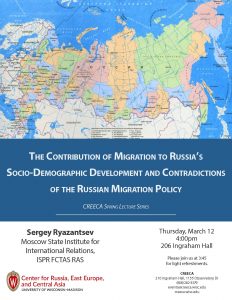 Sergey Ryazantsev is the Acting Director of the Institute of Social-Political Research of the Russian Academy of Sciences (ISPR RAS) and Professor of International Relations at the Moscow State Institute for International Relations. He is considered a leading expert in the field of economic demography and migration processes in the post-Soviet space and modern Europe. He works collaboratively with the Russian presidential and governmental bodies responsible for demographic and migration policy. As such, he participated in designing the state program to promote the return of Russians living abroad, as well as the “Concept of Russia’s Demographic Policy until 2025.” This lecture will focus on the intersection of migration and demographics with policy-making in the Russian Federation.