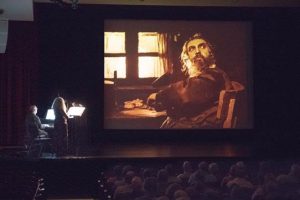 With live original music composed and performed by world-renowned klezmer violinist Alicia Svigals and celebrated silent film pianist Donald Sosin, The Ancient Law (1923) begins when Baruch, the son of a rabbi, becomes fascinated by the theater. Against his father’s wishes, Baruch leaves home and finds his way to Vienna, where an archduchess falls in love with him and facilitates his successful career as an actor. But Baruch continues to long for home, and must find a way to reconcile his religious heritage with his love of secular literature. This new restoration from the Deutsche Kinemathek closely corresponds to the original German theatrical release, both in its length and digitally simulated color tinting. The ensemble score by Donald Sosin and Alicia Svigals will be performed live by the composers. Co-presented with the support of  Cinematheque, the Mayrent Institute for Yiddish Culture, and the Mosse/Weinstein Center for Jewish Studies. This event is made possible with support from the Sunrise Foundation.

Alicia Svigals (violinist and composer) is the world’s leading klezmer violinist and a founder of the Klezmatics. She has performed with and written for violinist Itzhak Perlman, the Kronos Quartet, Debbie Friedman, Osvaldo Golijov, Robert Plant and Jimmy Page, playwrights Tony Kushner and Eve Ensler, filmmaker Judith Helfand, poet Allen Ginsberg and many others. Her live silent film scoring projects, the award-winning The Yellow Ticket and her new score, The Ancient Law (co-composed with Donald Sosin) are touring the world to acclaim. Her CD Fidl (1996) reawakened klezmer fiddle tradition. Her newest CD is Beregovski Suite: Klezmer Reimagined, with jazz pianist Uli Geissendoerfer – an original take on long-lost Jewish music from Ukraine. 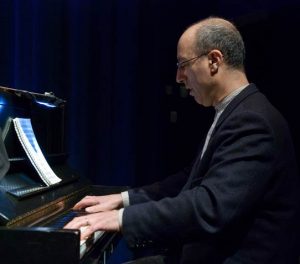 Donald Sosin (pianist and composer) has performed his scores for silent films at Lincoln Center, MoMA, BAM, the National Gallery; many college campuses including Yale, Harvard, Cornell and Brown, and major film festivals in New York, San Francisco, Telluride, Hollywood, Pordenone, Bologna, Shanghai, Bangkok, Berlin, Vienna, Moscow, and Jecheon, South Korea. He records for Criterion, Kino, Milestone and Flicker Alley, and his scores are heard frequently on TCM. Sosin has had commissions from MoMA, the Chicago Symphony Chorus, the San Francisco Chamber Orchestra and the Jerusalem Symphony Orchestra. His score for The Ancient Law, co-written with violinist Alicia Svigals, was released on DVD/BluRay in 2018 by Flicker Alley. They are also touring with their score for City Without Jews (Stadt Ohne Juden).

Note: This event is free and open to the public on a first-come, first-serve basis. Doors will open 30 minutes before the start of the event. In consideration of both the performers and the audience, no one will be admitted 15 minutes after the beginning of the event.

Mask Policy: In accordance with campus policy, all students, employees, and visitors are required to wear face masks while inside campus buildings.