The Wends of Texas: a Case Study of German Minority Immigration to the U.S. 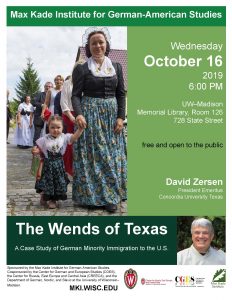 Sorbs or Wends are a Slavic minority living in a region of eastern Germany that borders Poland and the Czech Republic. In the mid-19th century, many Sorbs/Wends immigrated to Australia, South Africa, South America, and Canada, with the largest group settling in Lee County, Texas. This presentation will address the history of the Sorbs/Wends as they lived among German-speakers in Europe and in the U.S., including their contributions to literature, theology, and music.

David Zersen is President Emeritus of Concordia University Texas. He holds D.Min and Ed.D. (Teacher’s College, Columbia University) degrees, having done graduate work at Georg August University in Goettingen, Germany. He is a Lutheran clergyman and a Fellow of the Royal Historical Society. Dr. Zersen has published extensively on Sorbian/Wendish topics.