Russia: Rise and Fall of the Rule of Law 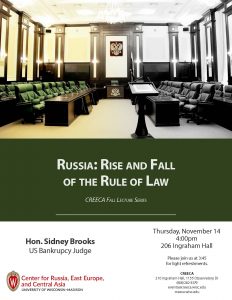 In this talk, Hon. Sidney Brooks will present an abbreviated statement of fact and personal experience dealing with the Russian Supreme Commercial (Arbitrazh) Court from 1991 to 2016. He will tell the first-hand story of working with the Supreme Commercial Court of Russia as it reformed and adopted principles intrinsic to an independent, objective, and fair court system, and practices consistent with the rule of law, individual rights, transparency and deterring corruption. The lecture will conclude with the seemingly inexorable governmental and political pressures which rolled back much serious and valuable commercial court reform.

Judge Brooks served a two-term appointment as a bankruptcy judge, having been appointed on January 4, 1988. He served as Chief Bankruptcy Judge from February 2003 to January 2007. In addition to having served on the bench for 28 years and practiced law for 17 years, Judge Brooks lectures, teaches courses, conducts seminars, and writes for numerous professional organizations, schools and publications.

His current professional activities include membership in and/or service as an officer or board member of the American Bankruptcy Institute, the National Conference of Bankruptcy Judges, Rotary Club of Denver, Rotary Foundation, University of Denver Alumni Advisory Committee, Nanda Center for International and Comparative Law, Denver Committee on Foreign Relations, and the U.S. Russia Foundation.

Judge Brooks’ primary area of professional work outside of the courtroom is development and implementation of international rule of law programs around the world. On behalf of various government and non-government organizations, including the U.S. Russia Foundation, the Library of Congress’ Open World Leadership Program, the Central and East European Law Initiative, the International Judicial Relations Committee of the United States Judicial Conference, the United States Department of State and The World Bank, Judge Brooks has been assisting with the development of judicial training and court management programs. He has worked with and advised judicial officials from Russia, Kazakhstan, Kyrgyzstan, Mongolia, the People’s Republic of China, Poland, Romania, Macedonia, Thailand, Mexico, India, Canada, Armenia, Egypt, Brazil, Argentina, and the Czech Republic, with regard to international commercial/insolvency law and court administration and judicial affairs.