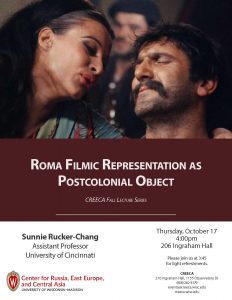 In this talk Dr. Rucker-Chang will employ a postcolonial frame to highlight how the depiction of Roma in post-Yugoslav film render them postcolonial “objects,” knowable by way of difference constructed through racial hierarchies, stereotypes, and culture.

Sunnie Rucker-Chang is Assistant Professor of Slavic and East European Studies and Director of European Studies at University of Cincinnati. Her primary interests lie in cultural and racial formation(s) in the Balkans. She is a co-editor of and contributor to the book Chinese Migrants in Russia, Central Asia and Eastern Europe (Routledge, 2011). Her work has appeared in the Journal of Muslim Minority Affairs, Critical Romani Studies, Journal of Transatlantic Studies, and Interventions: The International Journal of Postcolonial Studies. Her co-authored book, Roma Rights and US Civil Rights: A Transatlantic Approach, is currently in press with Cambridge University Press, and her co-edited volume Balkan Migrants: to, from, and in the Balkans: Identity, Alterity, and Culture is under contract with Liverpool University Press. For the 2019-2020 academic year Sunnie will work on her monograph focusing on racial formations and Blackness in Yugoslav and post-Yugoslav space for which she has been awarded an American Association of University Women Postdoctoral Research Leave Fellowship.