RACE IN FOCUS: New Directions in Research: Russian Literature in the 19th and 20th Centuries

Russian Literature in the 19th and 20th Centuries

Bella Grigoryan is an Associate Professor and Chair of Slavic Languages and Literature at the University of Pittsburgh. Her research focuses on 18th- and 19th- century Russian literature and Culture, Russian imperial politics and aesthetics, and Global contexts of Russian imperial cultural production. She is the author of Noble Subjects: The Russian Novel and the Gentry, 1762-1861 (Northern Illinois University Press, 2018).

José Vergara is an Assistant Professor of Russian at Swarthmore College. His current primary research project explores the ways in which five major Russian authors—Yury Olesha, Vladimir Nabokov, Andrei Bitov, Sasha Sokolov, and Mikhail Shishkin—responded to James Joyce. José Vergara completed his Ph.D. in Slavic Languages and Literature at the University of Wisconsin-Madison. 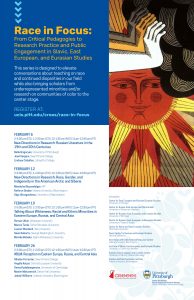