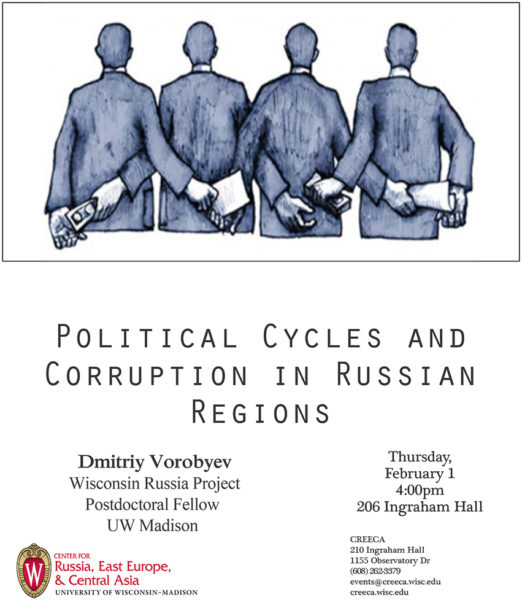 It has been established that opportunistic incumbent politicians, both elected and appointed, adjust public policies in systematic ways over political cycles. This study shows that corrupt behavior of appointed politicians also follows certain patterns, which are driven by political cycles. Russian regional governors, subject to the president’s appointment in 2004—2012, systematically changed their engagement in corruption over their terms of office depending on whether they were more or less likely to be re-appointed for another term. When a governor learns he will not be re-appointed, he has increasing incentives to engage in corrupt activities in order to accumulate wealth before his departure. Alternatively, when a governor becomes more certain that he will remain in office, he may have higher incentives to smooth rent extraction over time and thus not to increase it. This idea is tested using Russian regional data with consistently supportive evidence.

Dmitriy Vorobyev is currently a postdoctoral fellow with the Wisconsin Russia Project at UW-Madison. He is also an assistant professor and senior researcher at Ural Federal University in Yekaterinburg, Russia. His research looks at the Russian political economy, primarily focusing on such issues as the role of information in political processes and the efficiency of political institutions. He studies, both empirically and theoretically, how political institutions shape the information available to political agents, how information influences decisions made by agents, and how agents acquire information and affect its flows.