PANEL DISCUSSION: Mass upheaval in Belarus and Kyrgyzstan, war in Nagorno-Karabakh and Ukraine: Isolated Conflicts or an Emergent Pattern in Post-Soviet Space? 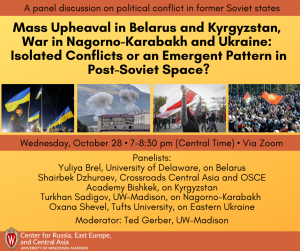 This panel will be given over Zoom: REGISTER HERE.

While 2020 is best known to many Americans as the year of COVID-19, the struggle for racial justice, and a fierce presidential election campaign, for a number of former Soviet states it has brought violent political conflict. Mass protest movements have challenged election results in Belarus and Kyrgyzstan, provoking different responses from the incumbent regimes that declared themselves winners of the balloting. Full-scale combat has erupted between Armenia and Azerbaijan in the area around the disputed territory of Nagorno-Karabakh. Meanwhile, fighting continues between Russia-backed secessionist forces and government troops in Eastern Ukraine. What are the main roots of these conflagrations and how are they unfolding? Should each be understood as distinct, or do they have enough common features to suggest a general pattern or new trend? What challenges or opportunities do they pose for Russia and for the United States? What do they teach us about politics and conflict in post-Soviet countries? Please join us to hear our experts from the countries in question address these issues in a panel presentation, to be followed by questions and discussion from the audience.