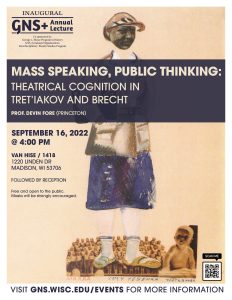 This lecture will explore the connections between, on the one hand, Sergei Tret’iakov and Sergei Eisenstein’s experiments with so-called “collective creation” in the Moscow Proletkul’t theater of the early 1920s and, on the other, Brecht’s work at the end of the decade on “public thinking” in the Lehrstücke. Both of these theatrical experiments insisted that collective thinking differs qualitatively from individual thinking. And with this shift from a psychological account of mind to a sociological one, the most important analytical question is no longer what an idea means, but how it works. Considering thought from this perspective forces us to shift our focus away from the “content” of ideas and the criterion of comprehension to materialist dimensions of thought such as scale and topology and swarm movement. The talk will consider the emergent macroproperties of people thinking together, and how these products might differ from the knowledge produced by a person thinking in isolation. As Étienne Balibar observes, the theory of the body politic is ultimately motivated by “the search for a strategy of collective liberation, whose guiding motto would be as many as possible, thinking as much as possible.”

This event is free and open to the public.
Masks will be strongly encouraged.