Yuliya Brel, Policy Scientist, Center for Applied Demography and Survey Research at the University of Delaware

This lecture will be given over Zoom: 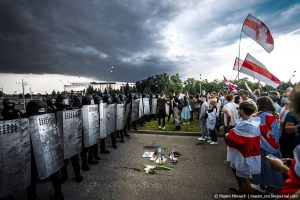 Belarusian citizens elected their first president in 1994. Within the next 26 years, A. Lukashenko ran for presidency five more times. With the exception of the first presidential election, the outcomes of all other consecutive elections were invariably disputed by the opposition and deemed undemocratic and rigged by the European community and the USA. Since 2006, presidential elections have been routinely followed by opposition rallies and protests as well as subsequent crackdowns on the protests and mass arrests of the protesters by the riot police. Every time, after the suppression of the protests, the situation would normalize, and Lukashenko would continue ruling the country without much threat to his personal power. However, the situation that arose in Belarus right before and after the latest presidential election of August 9, 2020, turned out to be completely unique. The scale and duration of mass protests against the rigged election (Lukashenko announced himself the winner with over 80% of votes for the sixth time) have been unprecedented. At the same time, the scale of repressions on the part of the state, and the brutality, cruelty, and downright sadism of the riot police have been unprecedented, too. This presentation analyzes how and why the first democratically elected Belarusian president became a dictator. It also offers a tentative explanation of changes that took place in Belarusian society and led to the current confrontation between Lukashenko and the people of Belarus. The presentation concludes with possible implications of the confrontation for the future of Belarus.

Yuliya Brel is an assistant policy scientist at the Center for Applied Demography and Survey Research at the University of Delaware. She holds Master’s and PhD degrees in Urban Affairs and Public Policy from the Biden School of Public Policy and Administration at the University of Delaware, and a Master’s degree in linguistics from Minsk State Linguistic University in Belarus. Her research interests concentrate on the problems of transition from authoritarianism to democracy in Central and Eastern European (CEE) countries and the former Soviet republics, and on why some of them fail to democratize. She also studies, modern dictatorships, democratic governance, and the role of civil society in the process of transition to democracy and its subsequent consolidation. Additionally, her research focuses on the modern nation-building in post-communist states and on whether the strength/weakness of national consciousness, alongside other factors, played a role in the divergent outcomes of the process of democratization in CEE countries. Finally, she inquires into social policy, for example, language policy and how it may affect minority language speaking communities, or utilities and housing sector policy and the reasons for its ill success in some authoritarian states.