CREECA LECTURE: A Small State on the Global Scene: Bulgaria’s ‘Developing World’ in the 1970s

This lecture will be given over Zoom: REGISTER HERE 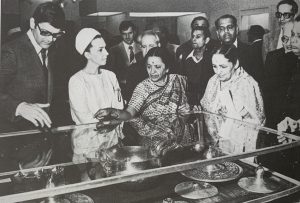 In the 1970s, officials and intellectuals in communist Bulgaria launched an ambitious program of international cultural outreach. Paris, Vienna, London, Munich, and New York City all hosted spectacular exhibitions of Bulgarian ancient treasures and medieval icons, but Bulgarian cultural ambassadors also sponsored concerts, film showings, and book readings in regional centers and rural areas throughout Latin America, Asia, and Africa. Focusing on Bulgarian cultural events in India, Mexico, and Nigeria, this talk highlights the role of culture in a small state’s foreign policy choices. By interrogating the unique notions of development that emerged out of these encounters, it explores the role of cultural diplomacy in the relationship between the Second and the Third Worlds during the later years of the Cold War.

Theodora Dragostinova is an Associate Professor of History at Ohio State University. Her work focuses on nationalism, migration, global history, and Cold War culture. She is the author of Between Two Motherlands: Nationality and Emigration among the Greeks in Bulgaria, 1900-1949 (Cornell UP, 2011) and the co-editor of Beyond Mosque, Church, and State: Alternative Narratives of the Nation in the Balkans (CEU Press, 2016). Her newest book, The Cold War from the Margins: A Small Socialist State on the Global Cultural Scene, is forthcoming with Cornell University Press in 2021.