“City-Managers vs. Mayors in Russian Provincial Capitals: Local Self-Government in the Context of Regime Transformation” 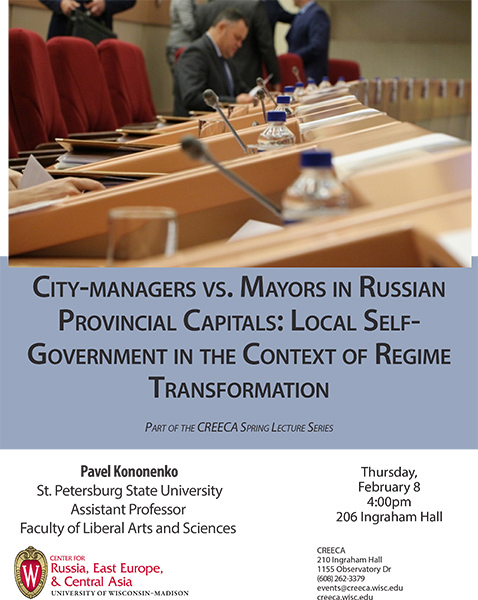 Local self-government in Russia has never been fully autonomous and self-sufficient. When Federal Law 131 was adopted in 2003, local governments completely lost their autonomy. This reform was dangerous for local self-government for two main reasons. First, new city manager positions were introduced, who were hired by local legislature to run the local executive branch instead of a directly elected mayor. This resulted in the increased number of abolished mayoral elections in Russian cities during the last decade. Second, the law also increased control of local governments by regional authorities. In the Russian political context, introducing city managers was motivated by a need to extend the reach of the federal government and did not result in improved efficiency, transparency, or professionalism of local governance, as was officially intended by the law’s creators. Practical implementation of the reform morphed into a process controlled by regional governments. City managers are thus seen as indicators of the municipalities’ inclusion in the federal “vertical of power”. Although this law was implemented in 2006, not all municipalities in Russia underwent this reform at the same time. Using a sample of 79 regional capitals, I aimed at answering the question: what factors accelerated or decelerated the introduction of city managers in the regional capitals in 2003-2015? Based on the results of a survival analysis, particularly Cox proportional-hazard regression, I argue that the institutional changes were accelerated by the regional capital’s economic and political “closeness” to the federal center, to higher levels of uncontrolled local politics, and were decelerated by its geographical remoteness from Moscow and by the political weakness of its mayors.

Pavel Kononenko is a senior lecturer in the Department of Liberal Arts and Sciences, Saint Petersburg State University. His research focuses on issues of Russian politics, Russian regional politics, and local self government. Recent publications include “Russia’s Local Government in the Process of Authoritarian Regime Transformation: Incentives for the Survival of Local Democracy,” co-written by Grigorii Golosov and Kristina Gushchina (2016) and “Russian Local Self-Government: The Evolution Towards Its End” co-written by K Gushchina (2017).