“Shadow of the Hegemon: Eastern Europe, Havel, and their Interpreters” 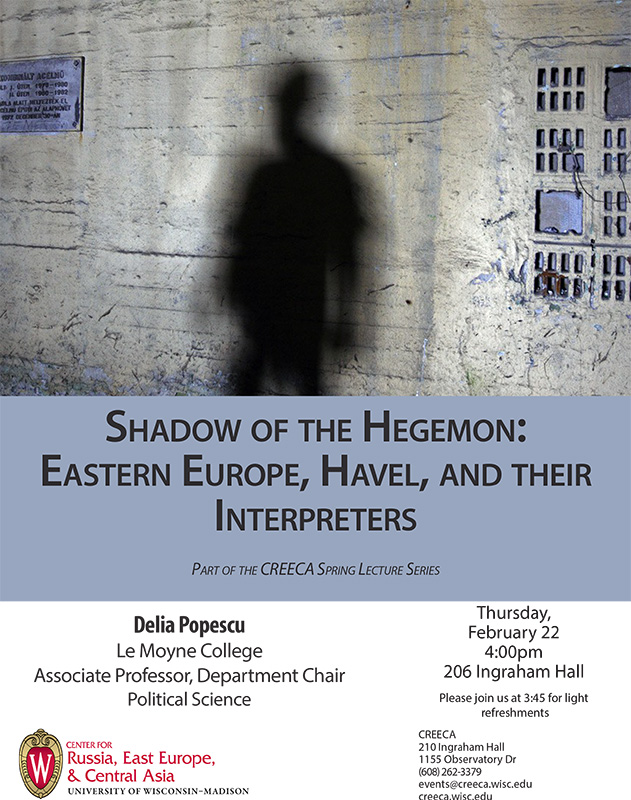 The canon of political theory rarely deals with Eastern European (EE) political thought, either as a regional category or in relation to particular thinkers. The East-West duality describes and prescribes a hermeneutic relationship that delineates a form of (subaltern) engagement with the East European other. I discuss the implications of this hermeneutic relationship for how the region is conceived, including its much contested variants, like the Balkans, and how it is reflected on the study of political thought coming from the region. To illustrate the argument, I briefly invoke the example of Vaclav Havel’s writings and their reception. I use this case study as a springboard to propose a reconsideration of both the study of political theory (and its canon) and, more specifically, of the East-West duality as an analytical category.

Delia Popescu is Associate Professor and Chair of Political Science at Le Moyne College, a social-justice oriented, Jesuit, liberal arts college in Syracuse, NY. Popescu is also the Director of the Peace and Global Studies as well as the Legal Studies programs at Le Moyne. Her research in applied political theory engages a variety of issues related to the construction of power and resistance, the Roma minority, deliberative democracy, post-communist memory studies, and nation-branding as hegemonic construction. The core of her work focuses on comparative political theory with a special interest in Eastern European political thought. She is the author of Political Action in Vaclav Havel’s Thought: The Responsibility of Resistance, 2011.