“Hate Crimes against LGBT People in Russia: The Current State of Affairs and Prospects for Further Research” 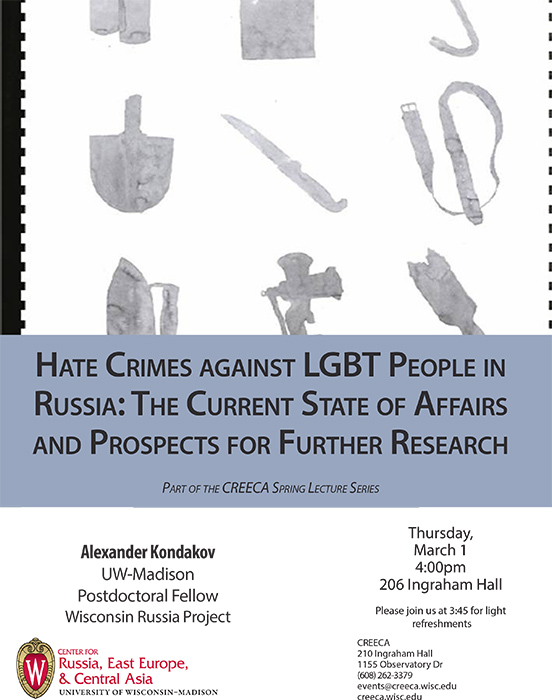 The law against ‘propaganda of non-traditional sexual relations’ (homosexuality) has operated in Russia since 2013. It legitimized homophobia, causing a wave of increased homophobia resulting in hate crimes (bashing, abuse, homicide) against people identified as lesbians, gay men or transgender. My research sought to identify the sources of data for further statistical generalization. As a result, I collected texts of court decisions on criminal law sentences of violence against members of the LGBT community. The generated data shows existing dynamics of hate crime against LGBT in Russia characterized by a dramatic growth in such crimes after the adoption of the ‘propaganda’ law. Further, narratives produced by judges demonstrate their views on different sexualities, perpetrator emotions, and other related themes. The texts of the legal sentences are powerful enunciations of juridico-political discourse supported by institutions of criminal law. Thus, many new venues of analysis exist that could be pursued to further scrutinize relations of power in Russia.

Alexander Kondakov, PhD in Sociology, is a Wisconsin Russia Project Postdoctoral Fellow at the University of Wisconsin–Madison. He is also an Assistant Professor in the Department of Political Science and Sociology at European University-St. Petersburg and a researcher at the Centre for Independent Social Research in St. Petersburg, Russia. He works as the deputy editor-in-chief for the Journal of Social Policy Studies published by the Higher School of Economics in Moscow. For the last decade, Kondakov’s work has been focused primarily on law and sexuality studies, more specifically on queer sexualities in Russia. He is the author of the report on hate crimes against queers in Russia that has shown the rise of violence after the adoption of the gay propaganda bill; part of this report has been presented to US Congress. His published articles have been included in Sexualities, Social and Legal Studies, and Feminist Legal Studies.