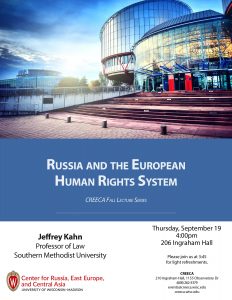 Russia eagerly ratified the European Convention on Human Rights in 1998. Twenty years later, the Chairman of its Constitutional Court now expresses resentment at the subordination he claims it works on Russian sovereignty. And twice since 2016, this Russian court has expressly declined to give effect to judgments against Russia by the European Court of Human Rights, which enforces the Convention, including refusal to pay its largest damages judgment against Russia in the tumultuous history of Russia’s membership in the Council of Europe.

Although other parties to the European Convention have been delinquent in meeting their legal obligations under it, only Russia has taken such defiant steps. This raises both theoretical and practical questions about the future of this extraordinarily successful human rights system, and Russia’s future in it.

Jeffrey Kahn is a professor of law at Southern Methodist University Dedman School of Law. In 2017-2018 he was a Fulbright Research Scholar at the University of Oslo. In 2011, Russian President Dmitrii Medvedev’s Human Rights Council asked him─the one American among six other experts from Russia, one from Germany, and one from the Netherlands─to write an expert report on the second conviction of Mikhail Khodorkovsky and Platon Lebedev. His scholarship on Russian law and legal reform includes Federalism, Democratization, and the Rule of Law in Russia (Oxford, 2002), and articles published or forthcoming in Post-Soviet Affairs, Review of Central and East European Law, Problems of Post-Communism, and the European Journal of International Law. He is a graduate of Yale College, Oxford University, and the University of Michigan Law School.