CREECA Lecture: “Ukrainians in Poland in Peace and War” with Iryna Januszek 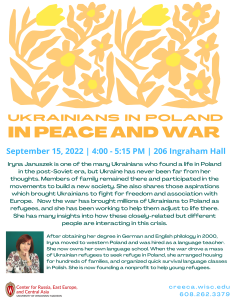 Iryna Januszek is one of the many Ukrainians who found a life in Poland in the post-Soviet era, but Ukraine has never been far from her thoughts.  Members of family remained there and participated in the movements to build a new society.  She also shares those aspirations which brought Ukrainians to fight for freedom and association with Europe.    Now the war has brought millions of Ukrainians to Poland as refugees, and she has been working to help them adjust to life there.  She has many insights into how these closely-related but different people are interacting in this crisis.

About the Speaker: Shortly after obtaining her degree in German and English philology in 2000, Iryna moved to western Poland and was hired as a high school language teacher.  Five years ago, she moved to Koszalin, Poland, earned an advanced degree in technical translation, and secured a post teaching Polish as a foreign language.  She now owns her own  language school called the “Success Factory.” When the war drove a mass of Ukrainian refugees to seek refuge there, she arranged housing for hundreds of families, and organized quick survival language classes in Polish. She is now founding a nonprofit to help young refugees.