Irena Sendler: In the Name of Their Mothers 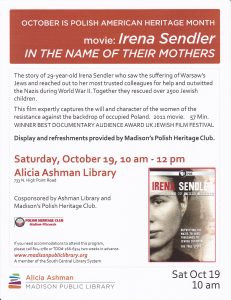 In honor of Polish American Heritage Month, we invite you to a screening of Irena Sendler: In the Name of their Mothers.

This documentary film tells the story of 29-year-old Irena Sendler, who saw the suffering of Warsaw’s Jews and reached out to her most trusted colleagues for help, outwitting the Nazis during World War II. Together they rescued over 2500 Jewish children. The film expertly captures the will and character of the women of the resistance against the backdrop of occupied Poland.

Cosponsored by the Ashman Library and Madison’s Polish Heritage Club.