MODERATOR:
Joan Neuberger (University of Texas at Austin) is President of the Association for Slavic, East European, and Eurasian Studies and Professor at the University of Texas at Austin in the Department of History. She studies modern Russian culture in social and political context, with a focus on the politics of the arts and earned her PhD from Stanford University. She is the author of an eclectic range of publications, including Hooliganism: Crime and Culture in St Petersburg, 1900-1914 (University of California Press, 1993), Ivan the Terrible: The Film Companion (Palgrave, 2003); co-author of Europe and the Making of Modernity, 1815-1914 (Oxford: 2005); and co-editor of Imitations of Life: Melodrama in Russia (Duke: 2001) and Picturing Russia: Explorations in Visual Culture (Yale: 2008); Everyday Life in Russian History: Quotidian Studies in Honor of Daniel Kaiser (Slavica, 2010); and The Flying Carpet: Studies on Eisenstein in Honor of Naum Kleiman (Mimésis International. 2017). Her most recent book is This Thing of Darkness: Eisenstein’s Ivan the Terrible in Stalin’s Russia (Cornell University Press, 2019), which was a finalist for 4 awards and won the American Historical Association’s George L. Mosse Book Prize.

PRESENTERS:
Svetlana Borodina (Columbia University) is Mellon Teaching Fellow at the Harriman Institute and Lecturer of Anthropology at Columbia University. As a medical and cultural anthropologist, Borodina studies post-Soviet cultures and the politics of disability inclusion in Russia. Her ethnographic work explores the technologies through which bodily and mental differences become folded into the production of postsocialist forms of citizenship and relationality for abled and disabled individuals alike. Borodina received her Ph.D. in Anthropology from Rice University in 2020. She also holds graduate certificates in Critical and Cultural Theory and in the Study of Women, Gender, and Sexuality. She has written about the affective politics at the nexus of bodies, technology, and biopolitical discourses of self-care, and about the emergent renegotiations of what constitutes ability and disability in contemporary Russia.

Kateřina Kolářová (Charles University) is Assistant Professor of Cultural Studies in the Department of Gender Studies at Charles University in Prague. She received her PhD in Anglo-American Literary Studies and an MA in History and English and American Studies and History from Faculty of Arts, Charles University in Prague. Her work is grounded in feminist cultural studies and is located at the intersections of sexuality and gender, critical disability and race/ethnic studies. Since 2008, she has been co-organizing a transnational queer film class in collaboration with Prof. Robert McRuer (George Washington University) and the queer film festival Mezipatra. She has organized multiple art projects and exhibitions focusing on disability arts and culture, as well as exhibitions focusing on AIDS/HIV and health. She is currently working on two books including Post-socialist Rehabilitations: Disability, Race, Gender and Sexuality and the Limits of National Belonging and Biological Citizenship and Chronic Embodiments: The Politics of HIV and AIDS in the Postsocialist Czech Republic.

Elana Resnick (University of California, Santa Barbara) is Assistant Professor of Anthropology at the University of California, Santa Barbara. She earned her PhD from the University of Michigan, Ann Arbor. Her research interests include environmental justice, materiality, waste management, racialization, nuclear energy, informal economies, urban infrastructure, postsocialism, EU integration, the Romani diaspora, and humor.  Based on over three consecutive years of fieldwork in Bulgaria conducted on city streets, in landfills, Roma neighborhoods, executive offices, and at the Ministry of the Environment, her book manuscript examines the juncture of material waste management and racialization, specifically highlighting the intersection between physical garbage and the Roma minority, often considered “social trash” throughout Europe.

Enikő Vincze (Babeș-Bolyai University) is an anthropologist and Professor at the Department of European Studies at the Babeș-Bolyai University in Cluj, Romania. Her research interests focus on nationalism, racism, feminism and intersectionality, Roma women, socio-spatial marginalization and exclusion, housing, and real estate development. Professor Vincze is a political activist on housing justice, involved in the local movement Social housing NOW and the national coalition Block for Housing in Romania. She directed a film on Roma women’s access to reproductive health (Red Poppies, 2006). Her recent publications include several books, such as Social Exclusion at the Crossroads of Gender, Ethnicity and Class: A View Through Roma Women’s Reproductive Health (Cluj: EFES, 2006), journal articles, and studies in volumes, such as Women and Citizenship in Central and Eastern Europe, ed. by Jasmina Lukic, Joanna Regulska and Darja Zavirsek (Ashgate, 2006). In addition, she edited numerous collective volumes, for example: Women and Men in the Multiethnic Cluj (Desire, 2001). 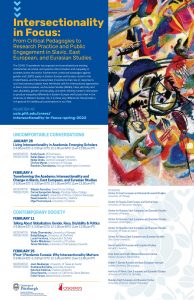