“How Jehovah’s Witnesses Became ‘Extremists’: The Strange State of Religious Freedom in Russia” 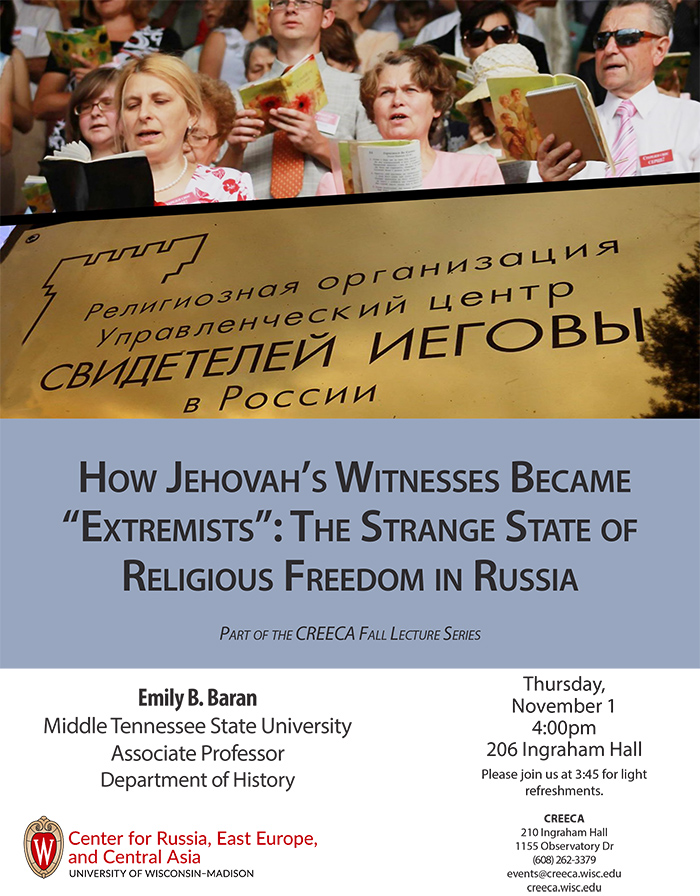 The Russian Supreme Court recently declared the Jehovah’s Witnesses to be an “extremist” organization. The April 2017 decision has placed the Jehovah’s Witnesses on the same legal footing as terrorist groups such as ISIS and Al Qaeda. Witness publications can no longer be imported or printed domestically, and the organization’s administrative center outside of St. Petersburg has been shut down and its assets liquidated. The court ruling has also had immediate implications for the more than 170,000 members of this Christian minority community in Russia. With their faith now officially classified as extremist, individual Witnesses have faced increasing harassment as they continue to conduct evangelism among their neighbors. The international organization of Jehovah’s Witnesses, the Watch Tower Bible and Tract Society, has appealed the decision to the European Court of Human Rights. In the meantime, the fate of Witnesses in Russia remains uncertain. This talk will reconstruct the history of Jehovah’s Witnesses on Russian soil and what led to this court decision. In doing so, it will consider the implications of the Witnesses’ ban for the state of religious freedom in Russia today.

Emily B. Baran is associate professor of History at Middle Tennessee State University. Her research explores the shifting contours of dissent and religious toleration in the Soviet Empire and its successor states, particularly for marginal religious communities. Her first monograph charted the history of Jehovah’s Witnesses in the Soviet Union and post-Soviet Russia, Ukraine, and Moldova. She is currently working on two book projects, one about the arrival of Soviet power in postwar Ukraine, and one about the transnational human rights campaign on behalf of Soviet Pentecostals in the late Cold War.