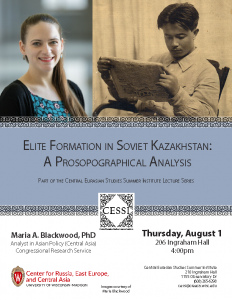 This talk will examine Soviet nationalities policy in Central Asia through the lens of a prosopographical overview of ethnic Kazakhs within the Kazakhstan’s pre-war nomenklatura, using biographical data to provide a statistical picture of Kazakhstan’s Party elite. Analyzing those Kazakhs who served as members of the republic’s Party Bureau between 1920 and 1937—examining when and where they were born, where they went to school, and when and how they joined the Party—offers insight into the broader process of elite formation in the early Soviet period, revealing clear patterns in terms of who became a Bolshevik and what types of people achieved political success in the first two decades of Soviet rule. It also illustrates the enduring resonance of the Russian colonial presence in Kazakhstan in determining the course of revolutionary change in the republic, and indeed its political landscape across the following decades.

Maria Blackwood is a Central Asia analyst at the Congressional Research Service. She was previously a Title VIII Research Scholar at the Kennan Institute and an Alfa Fellow with the NGO International Memorial. She completed a PhD in History at Harvard University in 2018, focusing on elite formation in early Soviet Kazakhstan. Her doctoral research was supported by grants from the American Councils for International Education, the Fulbright Program, and the Social Science Research Council, among others. Prior to her graduate studies she earned a joint BA/MA from Yale University (2010) and worked on international arbitration cases for an American law firm in Paris.