‘Doomed to Good Relations’: Mikhail Gorbachev, the Soviet Union, and the Islamic Republic of Iran, 1985-1991 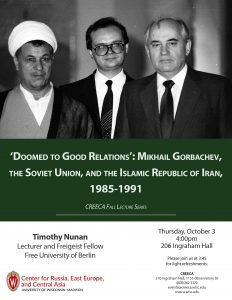 The Islamic Republic of Iran was founded on the slogan of “Neither East Nor West”–neither alignment with the Soviet Union nor the United States. The end of the 1980s saw, however, a rapprochement between Tehran and Moscow that would form the basis for relations between the countries to the present day. Drawing on archival resources and memoirs from the former Soviet Union, Iran, and Afghanistan, this talk explores how CPSU General Secretary Mikhail Gorbachev and Iranian elites such as Hashemi Rafsanjani and Ali Khamene’i abandoned pretensions of leading the global anti-imperialist movement and sought to use relations with the other to navigate world politics between the end of the Cold War and the Gulf War.

Timothy Nunan is a Lecturer (Wissenschaftlicher Mitarbeiter) and a Freigeist Fellow at the Center for Global History at the Free University of Berlin. He is the author of Humanitarian Invasion: Global Development in Cold War Afghanistan (Cambridge UP, 2016), a history of development and humanitarianism in Cold War-era Afghanistan. At present, he is engaged in two projects: one, a translation of M.S. Andreev’s On the Ethnology of Afghanistan, one of the few site-specific ethnographies of modern Afghanistan; and a book-length project exploring the struggle between Shi’i Islamist activists and their enemies during the Cold War.