Demand and Supply in Post-Conflict Governance: Legacies of Armed Conflict in Chechnya 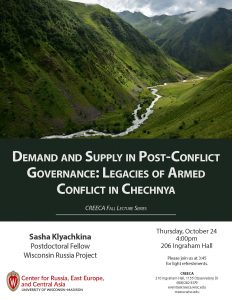 What alternatives to the state exist after conflict and when do citizens rely on them instead of, or alongside, relying on state authorities? Conventional studies of post-conflict contexts privilege the reconstruction of the state, but an expanding literature on non-state governance demonstrates that armed actors as well as religious authorities, elders, and informal community networks continue to be relevant to how citizens meet their needs, resolve disputes, and organize. Rather than focusing exclusively on state or non-state actors, this lecture begins by laying out a comprehensive framework to study who governs and how. Applying the framework to the case of Chechnya, Sasha Klyachkina shows that it is best characterized as a case of centralized governance but the pathways to centralization varied across domains of governance. Using interview, oral history, and survey data, Sasha shows that while the historical legacies of Soviet institutions constrained the range of possible governance arrangements, the differential patterns of violence in the two Chechen Wars altered both the demand and supply sides of governance. As a result, while state institutions continue to regulate goods provision, there is significant variation in both dispute resolution and symbolic practices, where the legacies of the armed conflicts are particularly prominent.

Sasha Klyachkina is a CREECA postdoc and recently completed her PhD in Political Science at Northwestern University. Her research focuses on how communities and individuals respond to crises, including different forms of armed conflict and state collapse, tracing when they turn to the state and when they seek to maintain self-governance or turn to non-state authorities. Empirically her research is rooted in the North Caucasus, where she conducted interviews, oral histories, and collected original survey data in collaboration with local research partners.