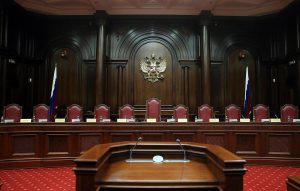 Dissenting opinions are an unusual type of judicial behavior, especially in autocracies. Except for in very rare circumstances, separate opinions do not lead to changes in law or policy, but judges spend their time and resources to author them. In authoritarian regimes, dissents are even less expected: why would judges publicly voice their disagreement with the majority given the higher personal risks of expressing such discontent? Yulia Khalikova examines when judges are more likely to express dissenting opinions. In this lecture, she will focus on the Russian Constitutional Court between 1992 and 2019 . Using original data on 629 judgments and 8,857 judicial votes, Khalikova explains dissenting behavior at the RCC. While every fifth judgment of the RCC has at least one dissent, these numbers decrease over time. Instead, judges increasingly write concurring opinions, choosing to express their disagreement with the reasoning – but not the outcome – as a safer way of expressing discontent. Khalikova shows that judges refrain from authoring dissents on political topics, and this tendency gets stronger with time. By contrast, in the area of social rights, there seems to be a consensus among judges: while the court is more likely to nullify laws and support the petitioners, individual judges are less inclined to write dissents and disagree with the majority.

“Judicial Dissent Under Autocracy: Evidence from the Russian Constitutional Court” paper can be read here.

About the Speaker: Yulia Khalikova is a Wisconsin Russia Project postdoctoral fellow at CREECA, with a Ph.D. from the University of Bremen, Germany. Her primary research focuses on the role of law and judicial institutions in authoritarian regimes with an application to Russia. Within this paradigm, she addresses such topics as judicial behavior and dissenting opinions at the Russian Constitutional Court, self-legitimacy of lawyers, and citations to international law by domestic courts.