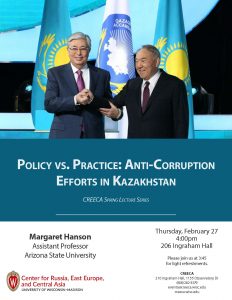 Corruption, defined broadly as the use of public office for private gain, remains a major issue throughout most of the former Soviet Union, and Kazakhstan is no exception. Both President Tokayev and his predecessor, Nursultan Nazarbayev, have for years publicly emphasized the need to reduce corruption, and introduced multiple initiatives to crack down on officials’ malfeasance. Yet, across perception-based and direct measures, levels of corruption in Kazakhstan remain stubbornly high. In this, the country is hardly alone: pervasive corruption is the norm rather than the exception in personalist dictatorships like Kazakhstan. In these regimes, leaders govern through vertically-organized, patron-client networks, and to ensure loyalty, tie opportunities for rent-seeking to official appointments — effectively creating what North et al. (2013) term a “limited-access order.” Corruption is thus integral to governance, which means that the dictator cannot eliminate it without also unraveling his control over the entire system. Why, then, do we see high-profile anti-corruption rhetoric and policies in Kazakhstan? The most obvious explanation is that such efforts are nothing more than elaborate window-dressing. In particular, as the country has developed economically and moved into the league of middle-income countries, dissatisfaction with widespread corruption and officials’ often opulent lifestyles has sparked protests and undermined popular support. As pressure for reform has mounted, both the First Leader of the Nation (and former President) Nazarabayev and President Tokayev have advocated a sweeping approach to rooting out corruption. In practice, however, I find that specific areas, like petty corruption, have been targeted, while in others, there has been little effort or progress. I argue this represents a deliberate choice: as a modernizing authoritarian regime, Kazakhstan has been seeking to improve public support and legitimacy by cracking down on the kind of corruption citizens regularly encounter in their day-to-day lives. These efforts are relatively low-cost because they target low-level officials like school directors, doctors, and police. In contrast, targeting high-level elites would be far more costly and likely to harm the dictator’s control; therefore, they remain exempt from these efforts. In making this argument, I draw on interviews with state officials involved in anti-corruption efforts, NGO leaders, and others involved in anti-corruption efforts, as well as official data. I conclude the chapter by exploring citizens’ views on corruption and the likelihood that this legitimacy-building strategy will be successful in combatting rising demands for greater transparency, accountability, and participation in Kazakhstan.

Margaret Hanson is an Assistant Professor in the School of Politics and Global Studies at Arizona State University. Her research focuses on law and legal institutions in autocracies, with an emphasis on the countries of the former Soviet Union. Her book manuscript, “Managing the Predatory State,” analyzes how corruption shapes governance in personalist regimes. Other projects examine the design and co-optation of courts in emerging autocracies, the measurement and impact of judicial corruption, the institutionalization of the procuracy in the Soviet Union and China, human capital development in autocracies, and individuals’ conceptualization of and support for democracy and autocracy. She received her PhD in Political Science from the Ohio State University, and served as a Post-Doctoral Fellow at the Weiser Center for Emerging Democracies at the University of Michigan, Ann Arbor from 2017-2018.