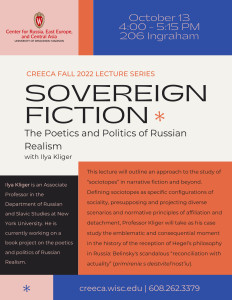 This lecture will outline an approach to the study of “sociotopes” in narrative fiction and beyond.  Defining sociotopes as specific configurations of sociality, presupposing and projecting diverse scenarios and normative principles of affiliation and detachment, Professor Kliger will take as his case study the emblematic and consequential moment in the history of the reception of Hegel’s philosophy in Russia: Belinsky’s scandalous “reconciliation with actuality” (primirenie s deistvitel’nost’iu). This lecture will discuss in some detail relevant elements of Hegel’s political philosophy as well as Belinsky’s idiosyncratic interpretation of it, and suggest that the encounter can shed light on prominent sociotopic tendencies in the later Russian realist tradition, which distinguish it from its Western-European counterparts.

Ilya Kliger is an Associate Professor in the Department of Russian and Slavic Studies. He specializes in 19th-century Russian novel, theory of the novel, literary theory, and the relationship between philosophy and literature. He is author of The Narrative Shape of Truth: Veridiction in Modern European Literature (Pennsylvania State University Press, 2011) and co-editor, with Boris Maslov, of Persistent Forms: Practicing Historical Poetics (Fordham University Press, 2016). He is currently working on a book project on the poetics and politics of Russian Realism.