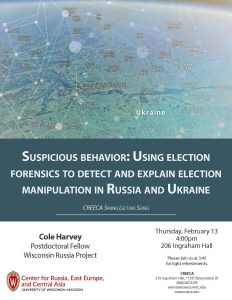 Election forensics is a growing field of statistical techniques that can be used to detect suspicious patterns in election data. Researchers are increasingly turning to such methods to detect and evaluate potential manipulation in elections, both internationally and in the US. This lecture will present a brief overview of the state of the art, discuss the benefits and drawbacks of the election forensic approach, and then demonstrate how election forensic methods can be used to study variation in electoral manipulation at the subnational level in Russia and Ukraine. In particular, it will show how the type of election manipulation that parties employ in a territory depends both on their access to patronage resources and the degree to which they face political risks in that region.

Cole J. Harvey is a 2019-2020 research fellow in the Center for Russia, East Europe, and Central Asia at the University of Wisconsin-Madison. He received his PhD in political science from the University of North Carolina – Chapel Hill in 2019, where his dissertation analyzed variation in election manipulation severity and tactics within Russia, Ukraine, and Mexico. His work has been published in Electoral Studies, Democratization, Europe-Asia Studies, and Government and Opposition. Prior to his graduate study, he was a Herbert Scoville Fellow and policy researcher in Washington DC, with a focus on nuclear disarmament and nonproliferation issues. Beginning in fall 2020, he will be an Assistant Professor in the Department of Political Science at Oklahoma State University.