Civil War and the Polarization of Ethnic Identities: Evidence from Bosnia 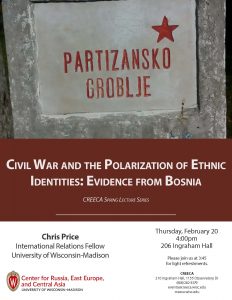 While recent findings suggest that violence during civil war can generate pro-social behavior, why do we often see polarization between groups based on ethnic, religious, or sectarian differences after conflict? What conditions explain why we see this in some cases, but not others? These questions matter, given that polarization complicates peacebuilding, affects post-war party politics, and may lead to a return to conflict.

Price argues that how violence is targeted during civil war is essential to explaining the observed variation. Targeting is an element of an armed organization’s violent repertoire, and refers to the specificity and criteria with which they select their victims.  He argues that collective violence, that which is deliberately targeted at pre-existing identities, even if they were previously seen by individuals as unimportant, increases the salience of that group identity. However, selective violence, that which is targeted based on individual behavior, or indiscriminate violence, that where groups use minimal or no criteria in victimizing civilians, are unlikely to provoke these responses. Where these changes are widespread, they aggregate into cleavages, the social divisions which define political competition, and these results may persist well past the initial conflict.

This lecture presents evidence from the Bosnian Civil War (1992 – 1995) to test the plausibility of this theory. The case is a critical one to the literature on violence and ethnic polarization, and sees variation in how armed organizations targeted violence over space and time. Price conducted qualitative process tracing in four matched villages which differ in targeting of violence during wartime, using life story interviews, archival evidence, and participant observation to test the predictions of his theory, and compare against alternatives. Using available information on targeting strategies, casualties, and voting returns, he provides statistical evidence that the patterns seen at the micro-level are consistent with larger patterns of ethnic voting after the war

Chris Price is currently an International Relations Fellow at the University of Wisconsin-Madison, as well as a 2019-2020 USIP Randolph Jennings Peace Scholar. His book project looks at under what conditions violence alters group identities such as ethnicity, religion and sect, an interest which dates back to his service as a peacekeeper in Kosovo. His work has been funded by the US Institute of Peace, the MacMillan Foundation, Yale University, and the Japan Foundation.