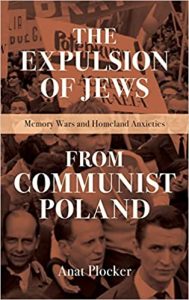 In March 1968, Polish youth rebelled against the communist regime, demanding free speech and academic freedom. In response, the government publicly accused Polish Jews of staging the demonstrations as part of a wide-ranging conspiracy to weaken communism and forced thousands of Jews to leave the country. The talk exposes the conspiracies the communist regime held and promoted, which had turned Polish Jews into “security risks,” and points to connections between contemporary memory politics in Eastern Europe and the anti-Jewish drive of 1960s Poland.

About the Speaker: Anat Plocker teaches at the School of General Studies at Stockton University, specializing in Modern European History. She gained her PhD from Stanford University and had been a fellow at Yale University and the University of Haifa. Her work on communist Poland has appeared in English, Polish and Hebrew. Plocker’s first book, The Expulsion of Jews from Communist Poland, was published with Indiana University Press in 2022.