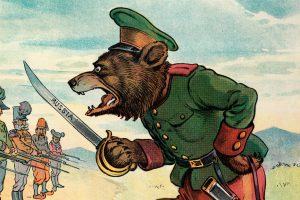 Military assertiveness in the “near abroad” and elsewhere has characterized Russia’s foreign policy at least since 2008. It has also played well with the Russian public. Is this aggressiveness due only or mostly to Putin’s ambitions or do popular attitudes in Russia support it as well? Data from opinion surveys feature prominently in discussions of the public’s foreign policy preferences. Typically, the majority of the respondents are not willing to accept a significant decline in their standard of living for the sake of restoring Russia to the world power status. However, this majority is not overwhelming, with about 40% exhibiting at least some willingness for such sacrifices. How does this number compare with other countries? While there exists a robust literature assessing happiness, trust, and preferences for democracy of the post-Soviet Russians on the basis of cross-country survey data, no such comparative analysis of popular foreign policy preferences has been done. Drawing on cross-national survey data since the 1990s, we find that the Russians, both across birth cohorts and time, disproportionately exhibit preferences that would arguably support aggressive foreign policies. Moreover, these preferences predate Putin’s rise to power. The data show that the Russians did not exhibit truculent nationalism in the 1990, but it was evident in 1995, suggesting that perhaps the national humiliation of the early 1990s caused the post-imperial syndrome among the Russian people.

About the Speaker: Michael Alexeev is Professor of Economics at Indiana University in Bloomington. He received his PhD in Economics from Duke University in 1984. Previously he taught at George Mason University and was a visiting faculty at Duke University and University of California (Berkley). His research and teaching interests lie mostly in the fields of institutional economics, law and economics, and economics of transition from a Soviet-type economy to a market economy. Recently he has also been interested in resource economics and fiscal federalism. Dr. Alexeev’s research has appeared in Journal of Economic Theory, Review of Economics and Statistics, European Economic Review as well as in other general and field journals. He has also co-edited The Oxford Handbook of the Russian Economy.