CREECA Lecture: To the Success of Our Hopeless Cause: The Many Lives of the Soviet Dissident Movement 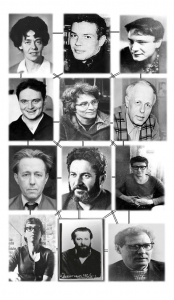 Rather than treat Soviet dissidents as avatars of Western liberalism, or take their appeals to rights and legal norms as natural, this talk investigates how, as products themselves of the Soviet order, dissidents arrived at a conception of law and human personality so at odds with official norms. Understanding this process – how orthodoxies contain the seeds of their own heresies, and how dissidents promoted the containment of Soviet power from within – promises to illuminate the broader problem of how citizens of authoritarian societies conceive and act on options for political engagement.

About the Speaker: Benjamin Nathans is the Alan Charles Kors Associate Professor of History at the University of Pennsylvania.  His most recent book is the co-edited volume From Europe’s East to the Middle East: Israel’s Russian and Polish Lineages.  He is currently finishing To the Success of Our Hopeless Cause: The Many Lives of the Soviet Dissident Movement.  Nathans is a regular contributor to the Times Literary Supplement, the New York Review of Books, and other periodicals.