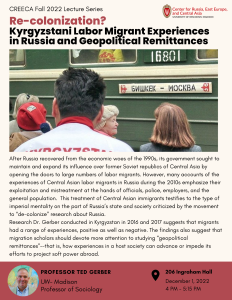 After Russia recovered from the economic woes of the 1990s, its government sought to maintain and expand its influence over former Soviet republics of Central Asia by opening the doors to large numbers of labor migrants from them.  However, many accounts of the experiences of Central Asian labor migrants in Russia during the 2010s emphasize their exploitation and mistreatment at the hands of officials, police, employers, and the general population.   Indeed, cruel, demeaning, and racist treatment of Central Asian immigrants testifies to the type of imperial mentality on the part of Russia’s state and society criticized by the movement to “de-colonize” research about Russia.

However, research the speaker conducted in Kyrgyzstan in 2016 and 2017, including focus groups and a survey in Bishkek of Kyrgyzstani migrants who had recently returned from Russia, suggests that they had a range of experiences, positive as well as negative. If anything, these experiences were linked to more positive than negative assessments of Russia’s institutions and foreign policy, which appears to reinforce, rather than undermine, Russia’s imperial objectives in its geopolitical conflict with the United States.  Apart from calling for caution in analyses of how Russia’s imperial legacy is perceived outside of Europe, the findings suggest that migration scholars should devote more attention to studying “geopolitical remittances”–that is, how experiences in a host society can advance or impede its efforts to project soft power abroad.