Sibelan Forrester, Professor of Modern and Classical Languages and Russian at Swarthmore College 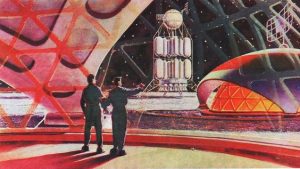 In Eastern Europe and Russia/the USSR, science fiction has often offered ways to make implicit assertions about the future. At times, this allowed depiction of plots and adventures much freer than was possible in the official style of Socialist Realism, where any future was constrained by Marxist theory: a story could assume “socialism in space” without having to specify how that happened. Authors could deploy the element of personal names, which would suggest with their ethnic and national associations that this future would be international. This talk will present a number of examples from Czech, Polish and Russian science fiction, bringing in not only nationality but also race and gender, and addresses some questions of how the names could be, or have been, effectively translated into English.

Sibelan Forrester is Susan W. Lippincott Professor of Modern and Classical Languages and Russian at Swarthmore College. She has translated fiction, poetry, and scholarly prose from Croatian, Russian and Serbian, including science fiction from Konstantin Tsiolkovsky, Olga Larionova, and Davor Slamnig. Her current research includes a study of how the Russian “technical intelligentsia” interacted with science fiction as both authors and readers.