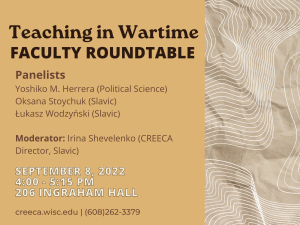 Please join us on Thursday, September 8 at 4:00 pm in room 206 Ingraham Hall to mark the start of a new academic year. Members of the CREECA faculty Yoshiko M. Herrera (Political Science), Oksana Stoychuk (Slavic) and Łukasz Wodzyński (Slavic) will discuss their teaching and research, with a special emphasis on classes they have designed or significantly revised to address Russia’s war against Ukraine. Moderated by Irina Shevelenko, CREECA Director and Professor of Slavic Languages and Literature.

Yoshiko M. Herrera is professor of Political Science at the University of Wisconsin-Madison. Her research focuses on Russian politics, nationalism, identity and ethnic politics; political economy and state statistics (national accounts); and international norms. Herrera’s reseach has been published with Cambridge University Press, Cornell University Press, Perspectives on Politics, Comparative Politics, Political Analysis, Social Science Quarterly, and Post-Soviet Affairs, and other outlets. In 2021, Herrera was a recipient of the Chancellor’s Distinguished Teaching Award at UW-Madison.

Oksana Stoychuk is a lecturer in the Department of German, Nordic, and Slavic+ at the University of Wisconsin-Madison. Combining literary, cultural, migration, and urban studies, Stoychuk’s research focuses on narratives of belonging in contemporary literature written by migrants and refugees, specifically in works written on and in Berlin between the 1960s and today. In Fall 2022, Stoychuk will be teaching Ukrainian language and Ukrainian Culture and Society.

Łukasz Wodzyński is assistant professor of Polish at UW-Madison in the Department of German, Nordic, and Slavic+. He has published on early twentieth-century Polish and Russian literature and contemporary Polish prose. Currently, Wodzyński is working on a book manuscript Romancing Modernism: Poetics of Re-Enchantment in Polish and Russian Early Twentieth-Century Novel.

Irina Shevelenko (moderator) is Professor of Slavic languages and literatures and director of CREECA at the University of Wisconsin-Madison. Her areas of research include Russian literary and artistic Modernism, intellectual history of the late imperial period in Russia, nationalism studies, and, more recently, late Soviet and post-Soviet literature and culture. Shevelenko is the author of two books, several edited volumes, and numerous articles. Her current book-length project is tentatively titled Writing the Twentieth Century in Post-Stalin Russia.